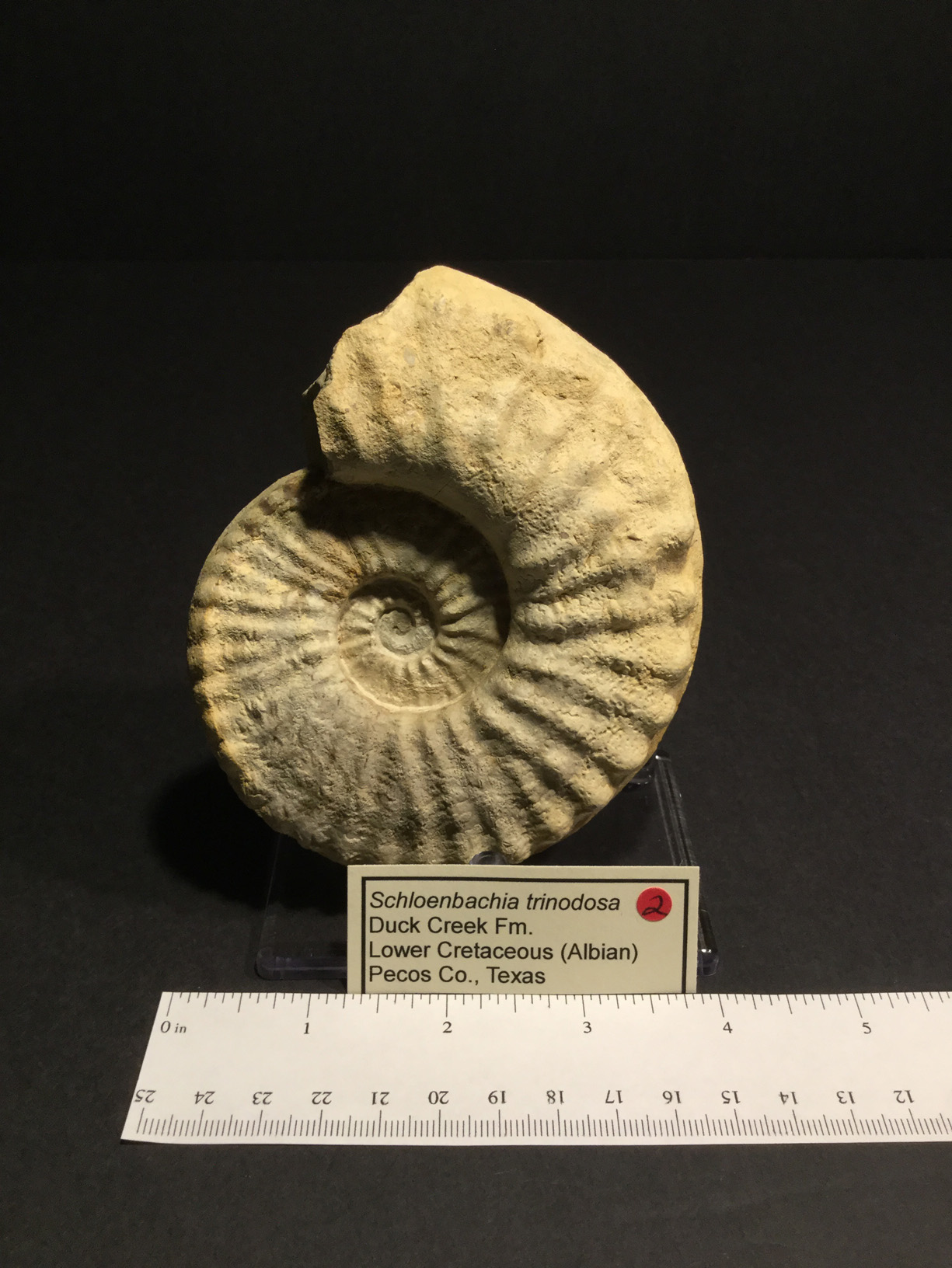 LK Ammonite Schloenbachia
Schloenbachia trinodosa
Duck Creek Fm. (Lower Cretaceous - Albian)
Pecos County, Texas
This is an excellent example of the genera. The detail is good. The innermost whorl is restored. The genus is small to large-sized with evolute coiling and deep, narrow umbilicus. The whorl section is taller than wide and is subrectangular or squarish. The venter has a low keel and appears squarish rather than rounded. Ribs are straighter and more widely spaced just before the body chamber. Three rows of coarse, equidistantly situated tubercles (nodes) occur: Umbilical, lateral, and ventrolateral. Nodate to clavate ventrolateral tubercles are particularly prominent.


--- At the type locality on Duck Creek, the formation consists of about 120 feet of limestone and marl, as follows: (a) Basal 40 feet of thin strata of limestone (up to 1 foot each) and thicker limy marl strata, forming the creek bluff north of the railway; Elobiceras, Hamites and many other fossils occur in the basal part, overlying the Kiamichi with Gryphaea navia and Oxytropidoceras (Adkinsites) belknapi; the entire thickness contains Desmoceras and Bendanticeras and Pervinquieria, and at the top there is a prominent zone of Epiaster whitei Clark. (b) A medial 40 feet is clay, with several species of Pervinquieria, Gryphaea, echinoids, and limonite fossils in two or three layers (this is the type locality of those described by Scott, (1388). (c) An upper 40 feet of clay, blue shale, and a few, scattered, thin, limy, seams, is exposed in the railway cuts southeast of the main creek cuts; these cuts contain many fossils, including pyrite micromorphs (Pervinquieria and others). At Fort Stockton, it is about 48 feet thick; at Kent, 50 feet; at El Paso, about 100 feet at Sierra Prieta, about 25 feet. The division into an upper, more marly, and a lower, more limy, portion persists from Red River to at least Johnson County.
$225
Purchase
LK Ammonite Schloenbachia has been added to your cart.
Continue Shopping Checkout Now
© fossilAvenue.com
HOME
ABOUT US
PRODUCT CATALOG
CONTACT US