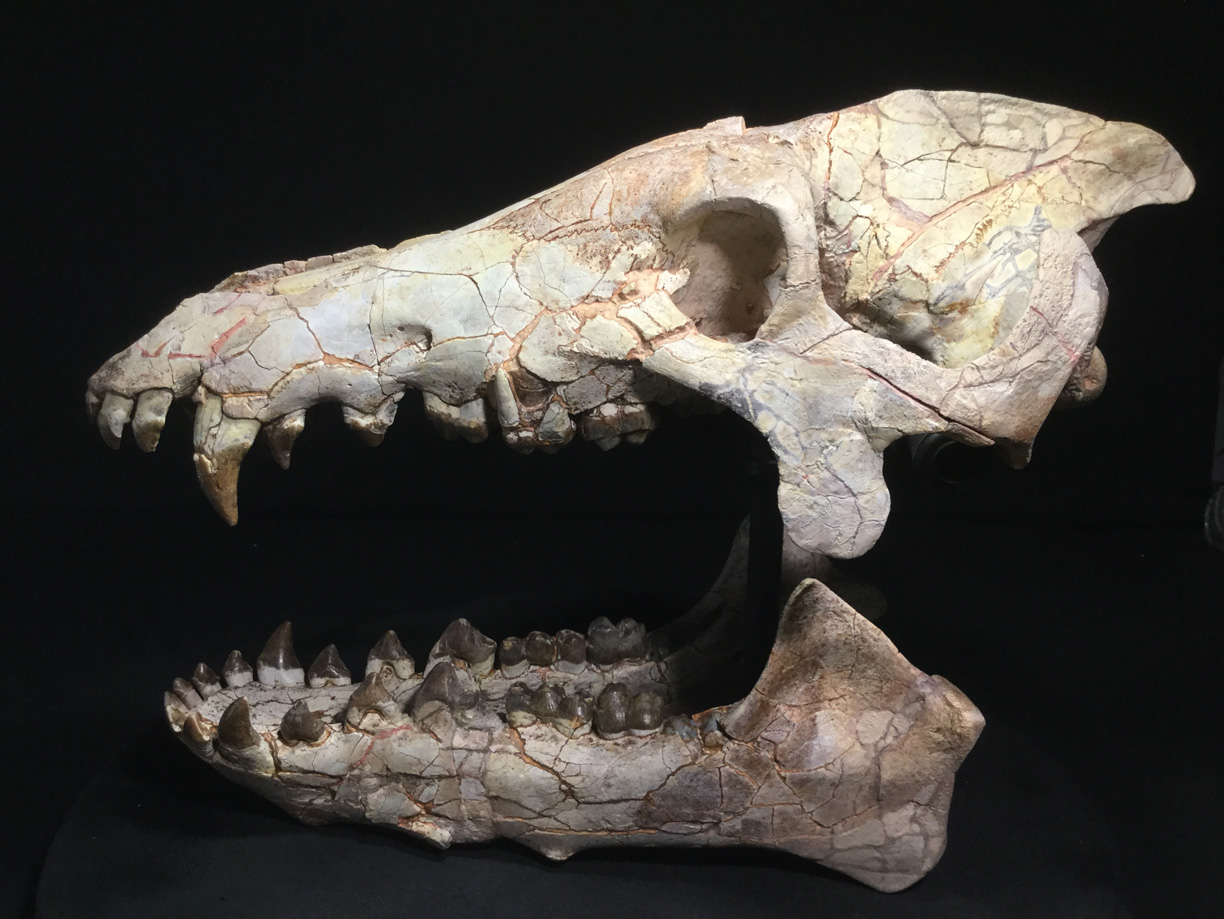 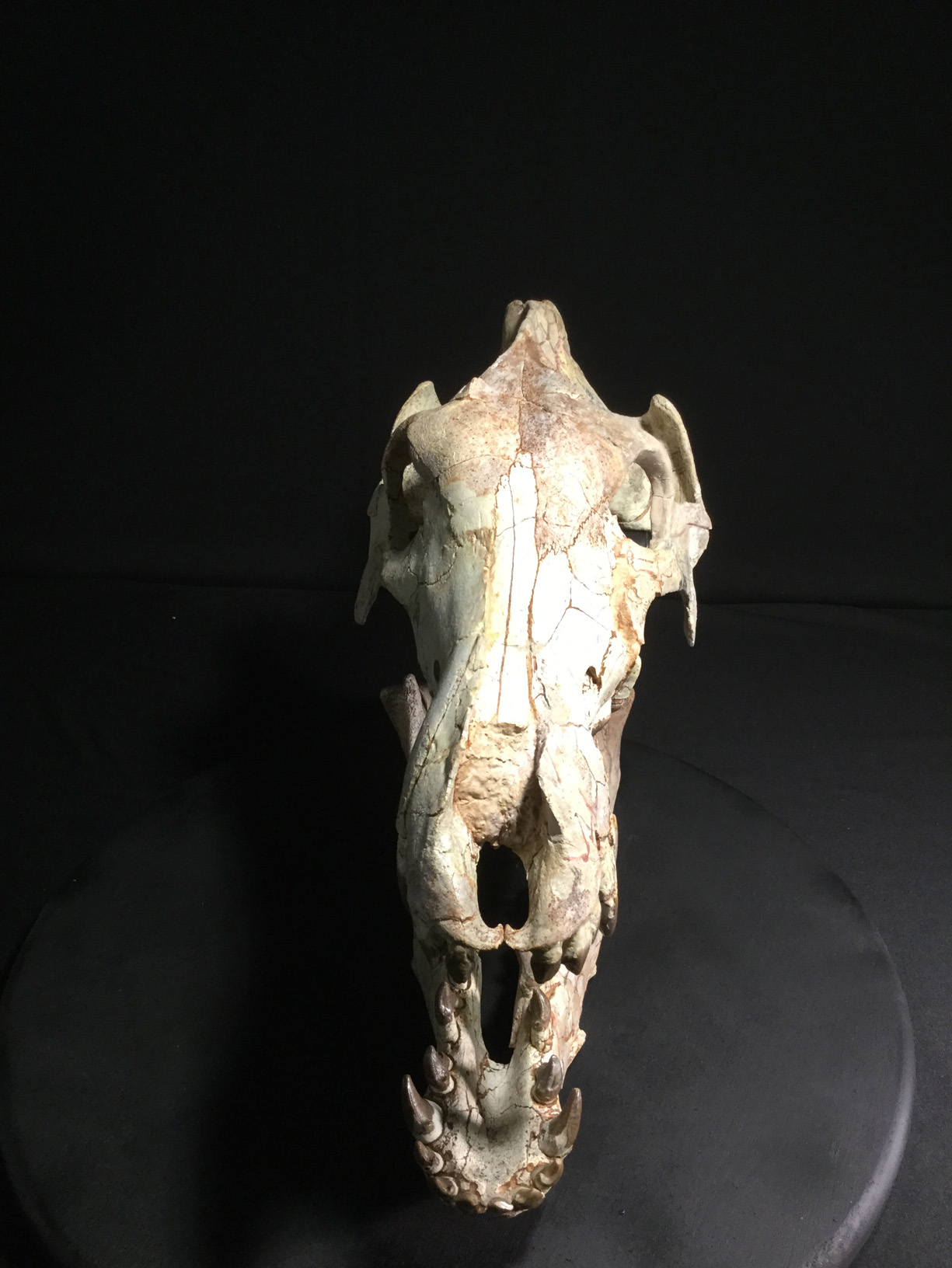 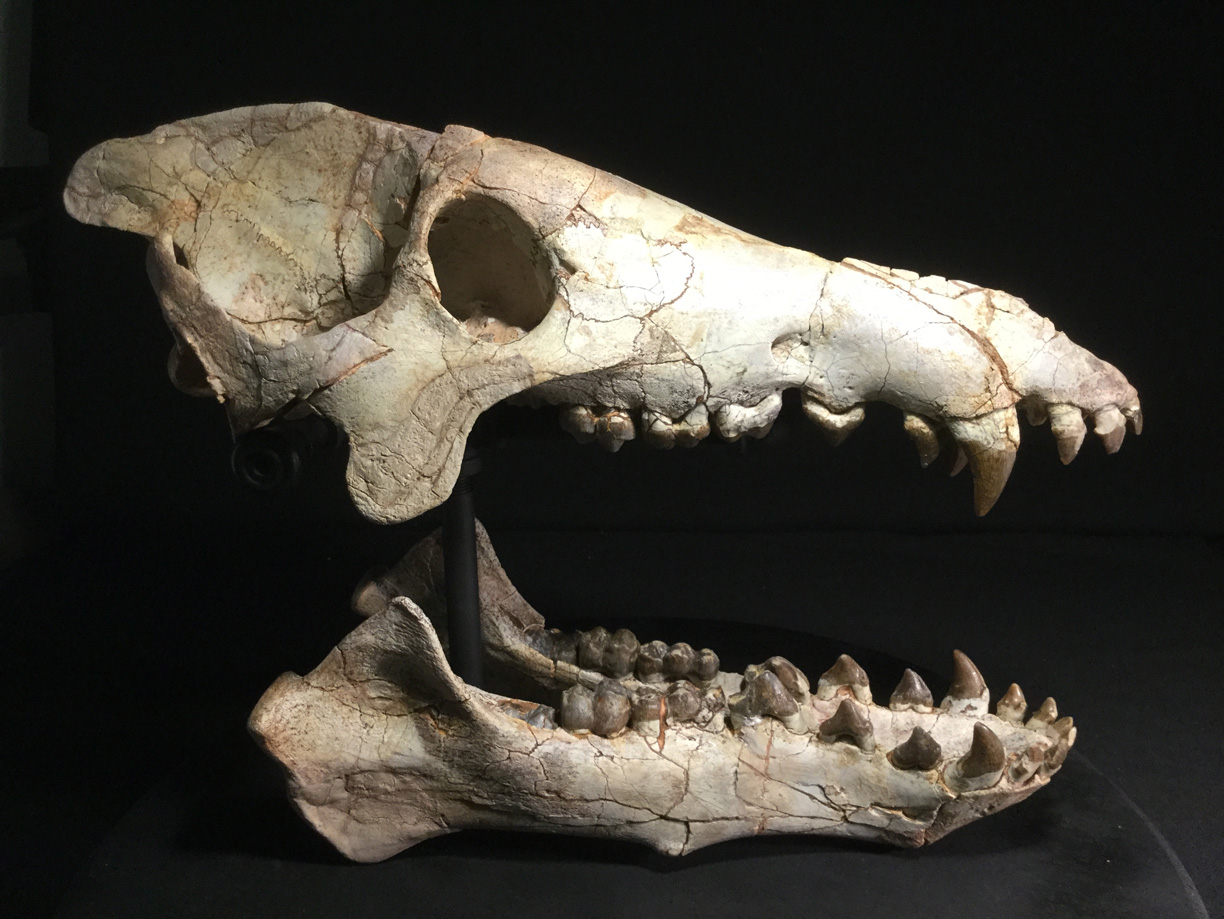 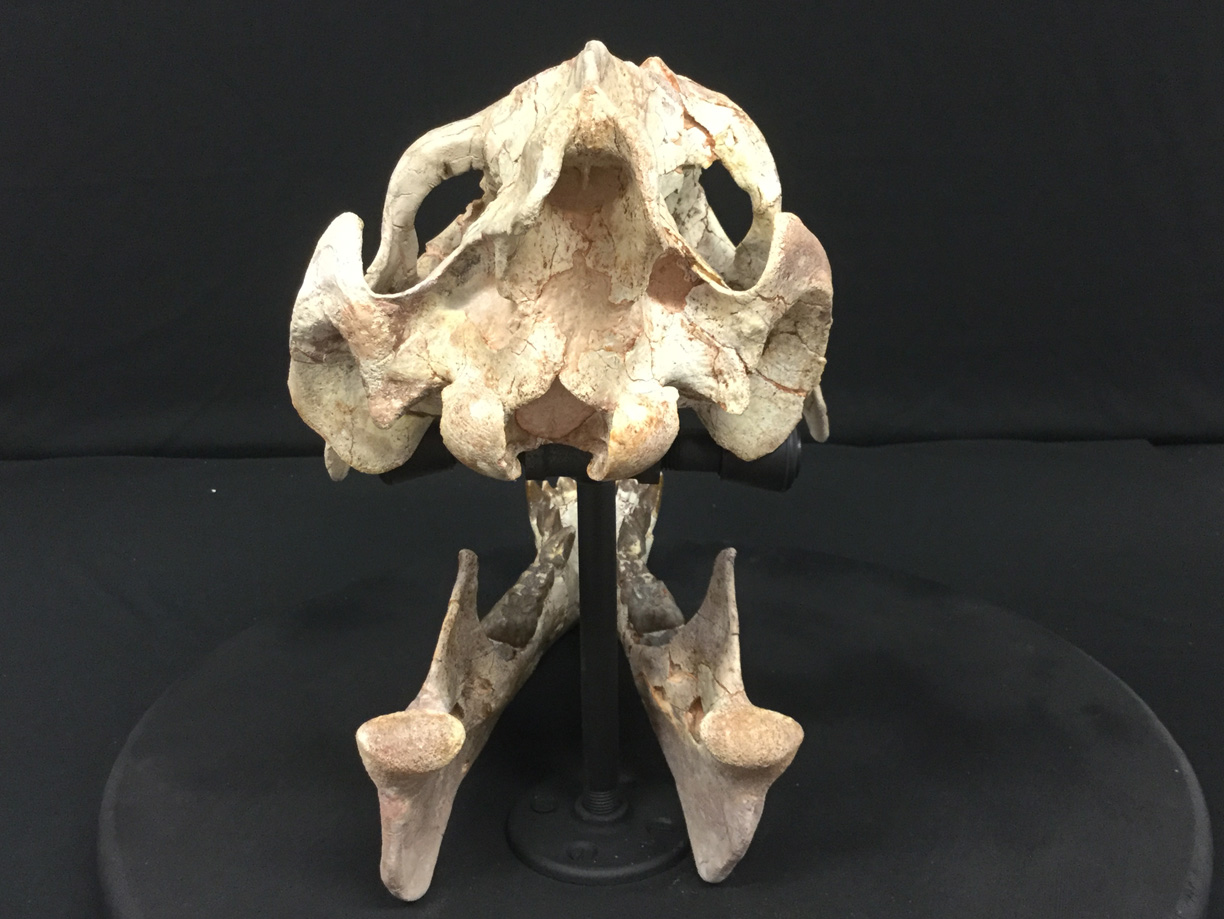 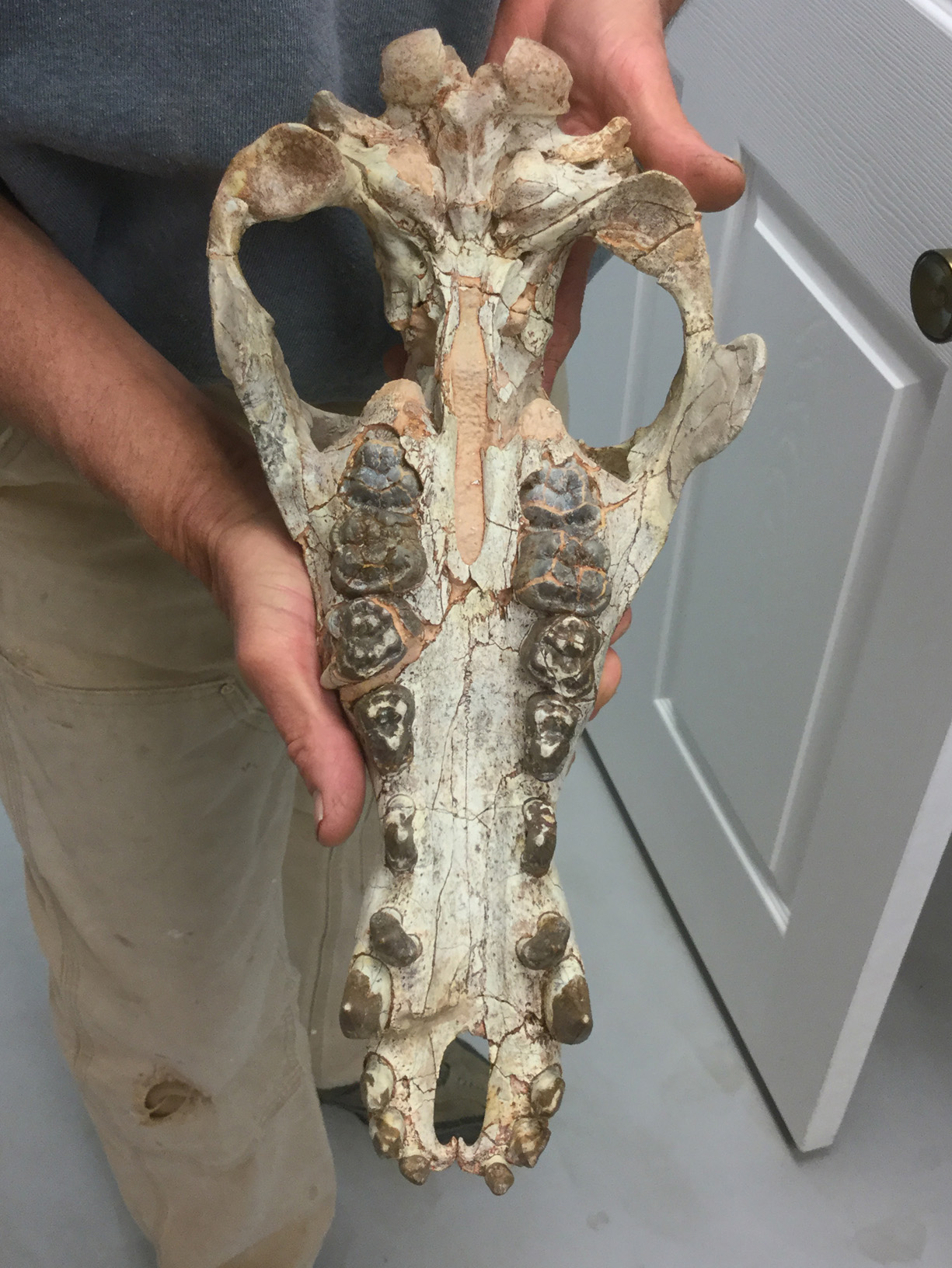 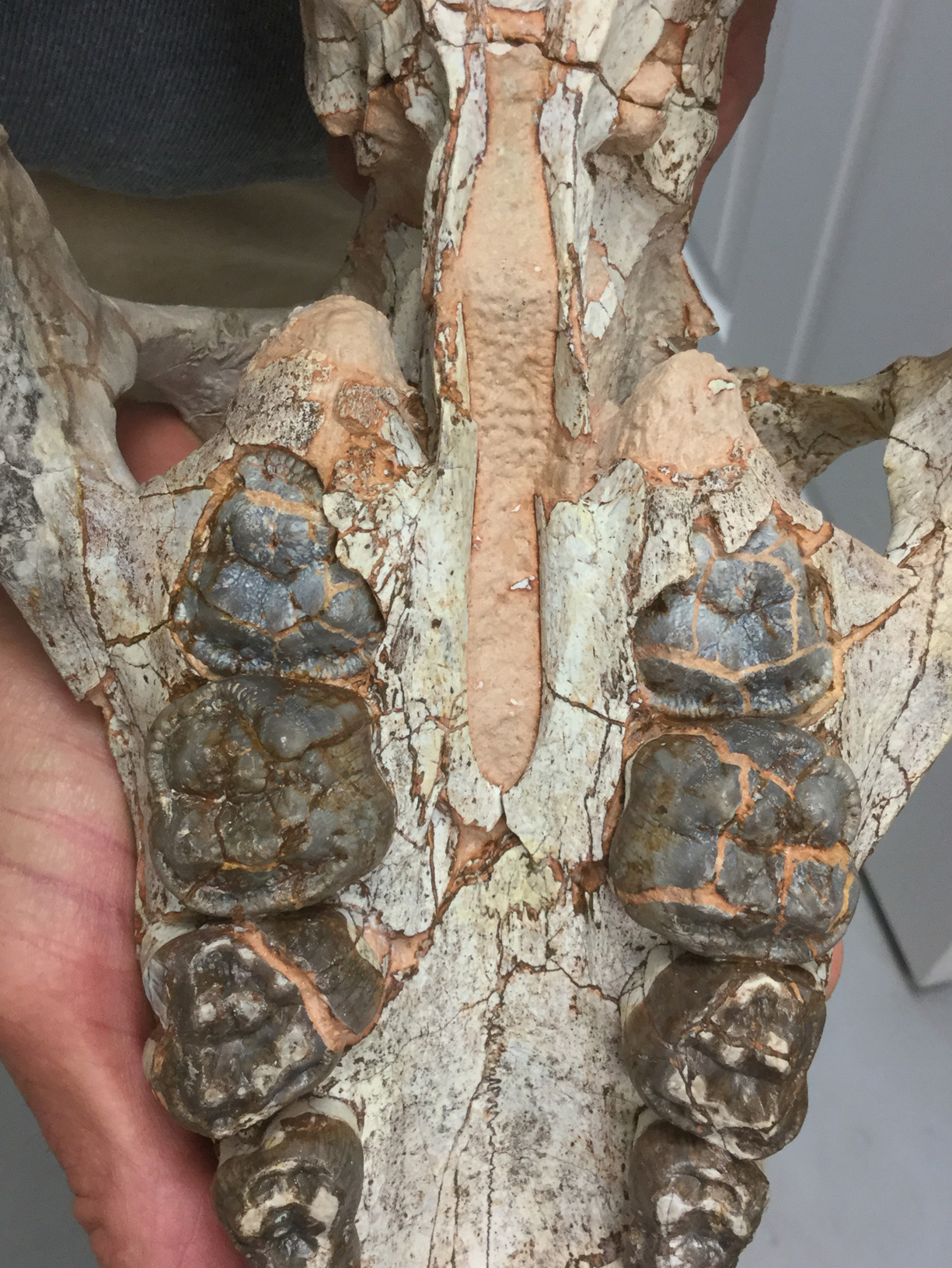 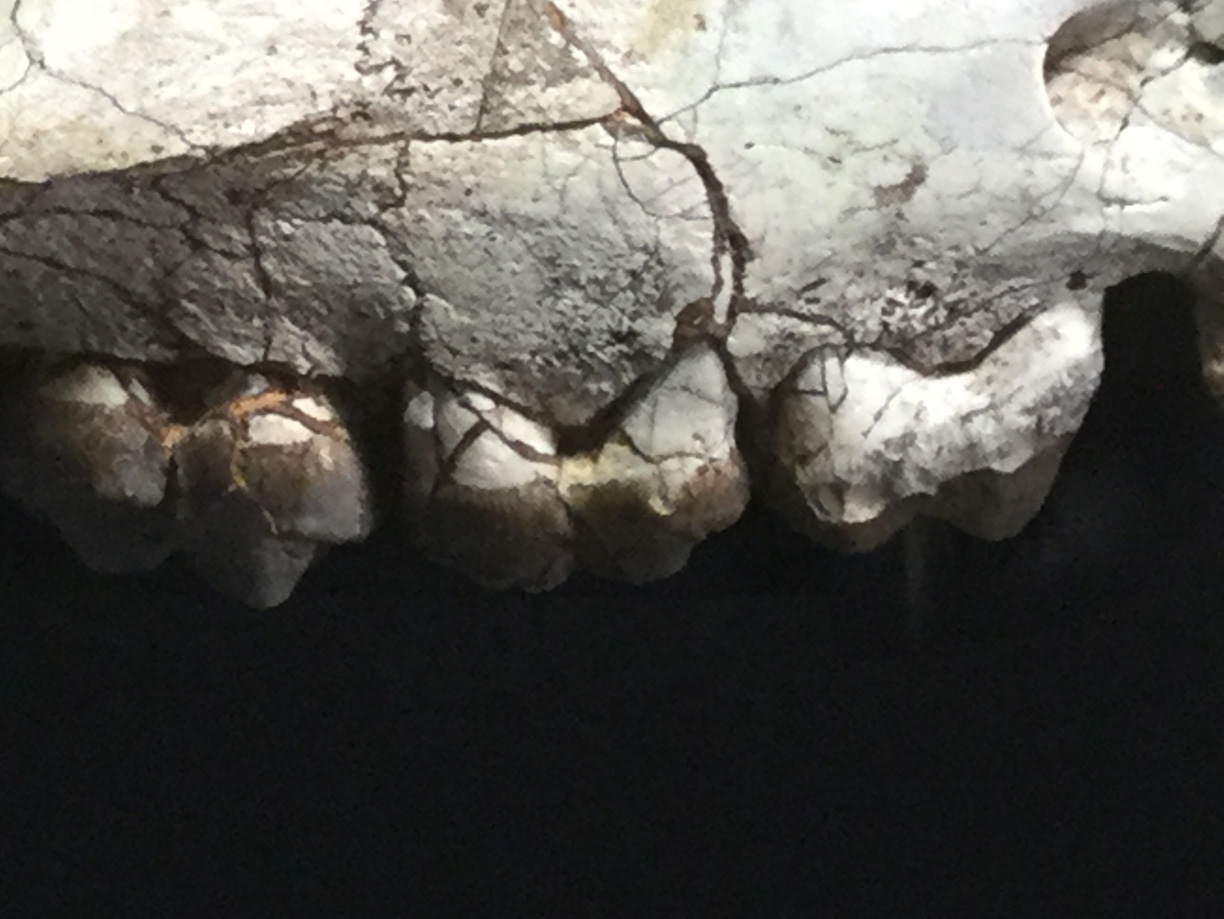 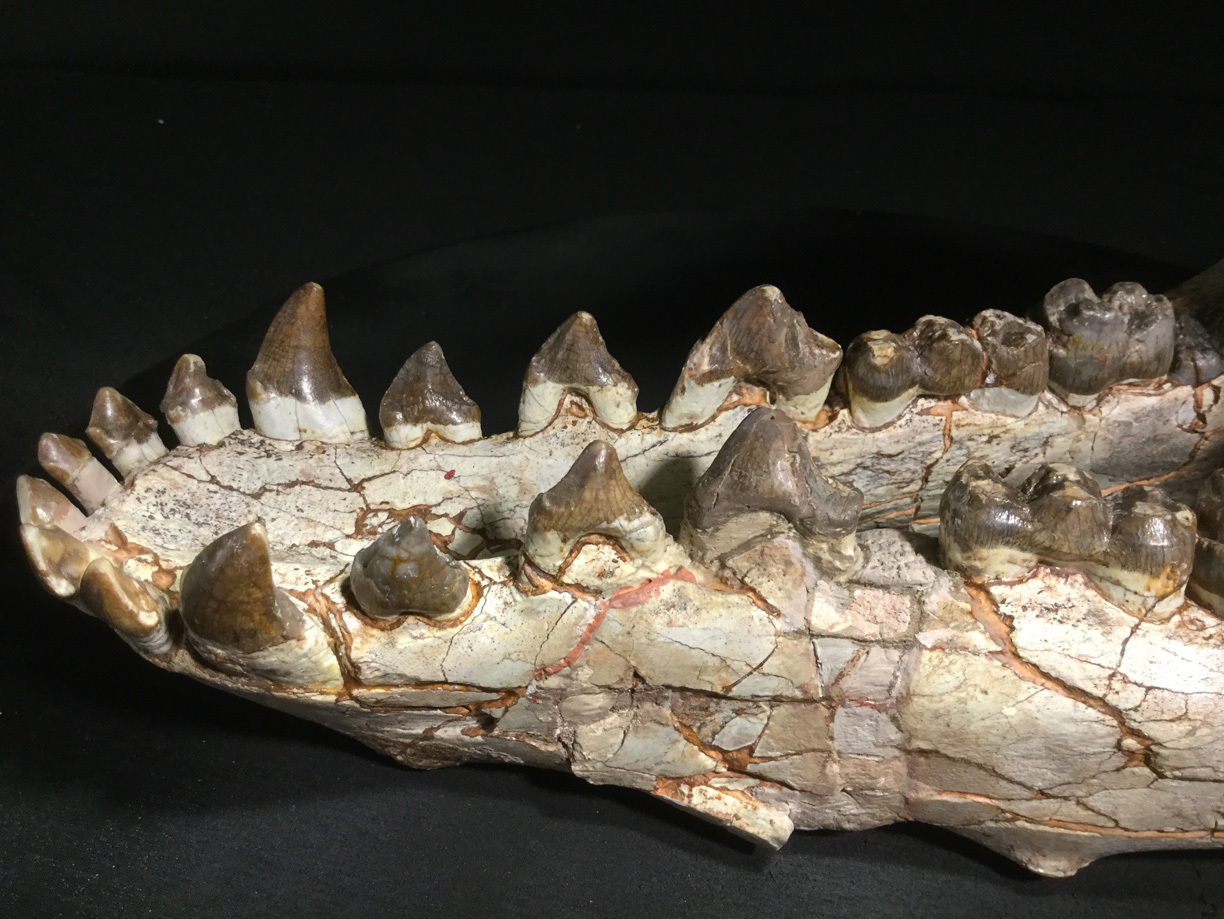 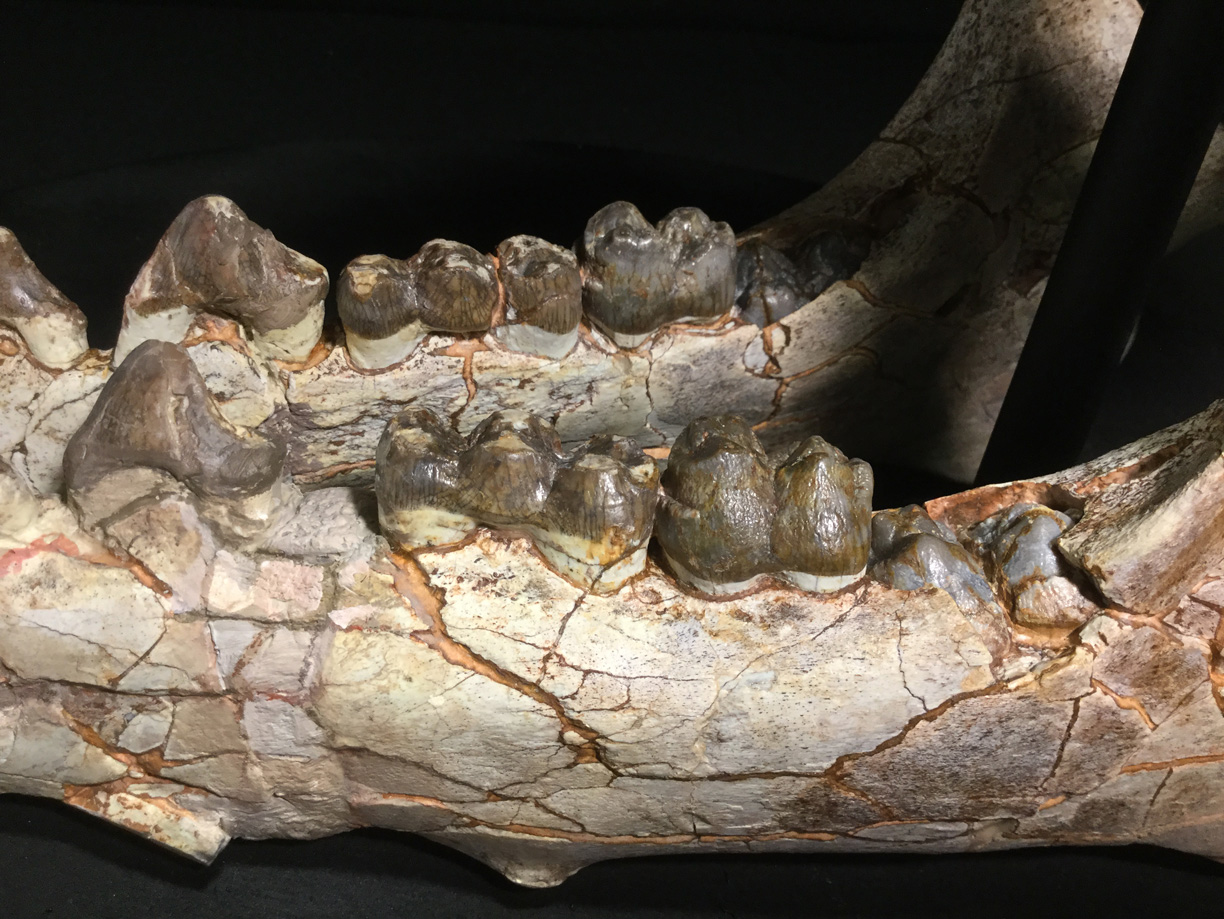 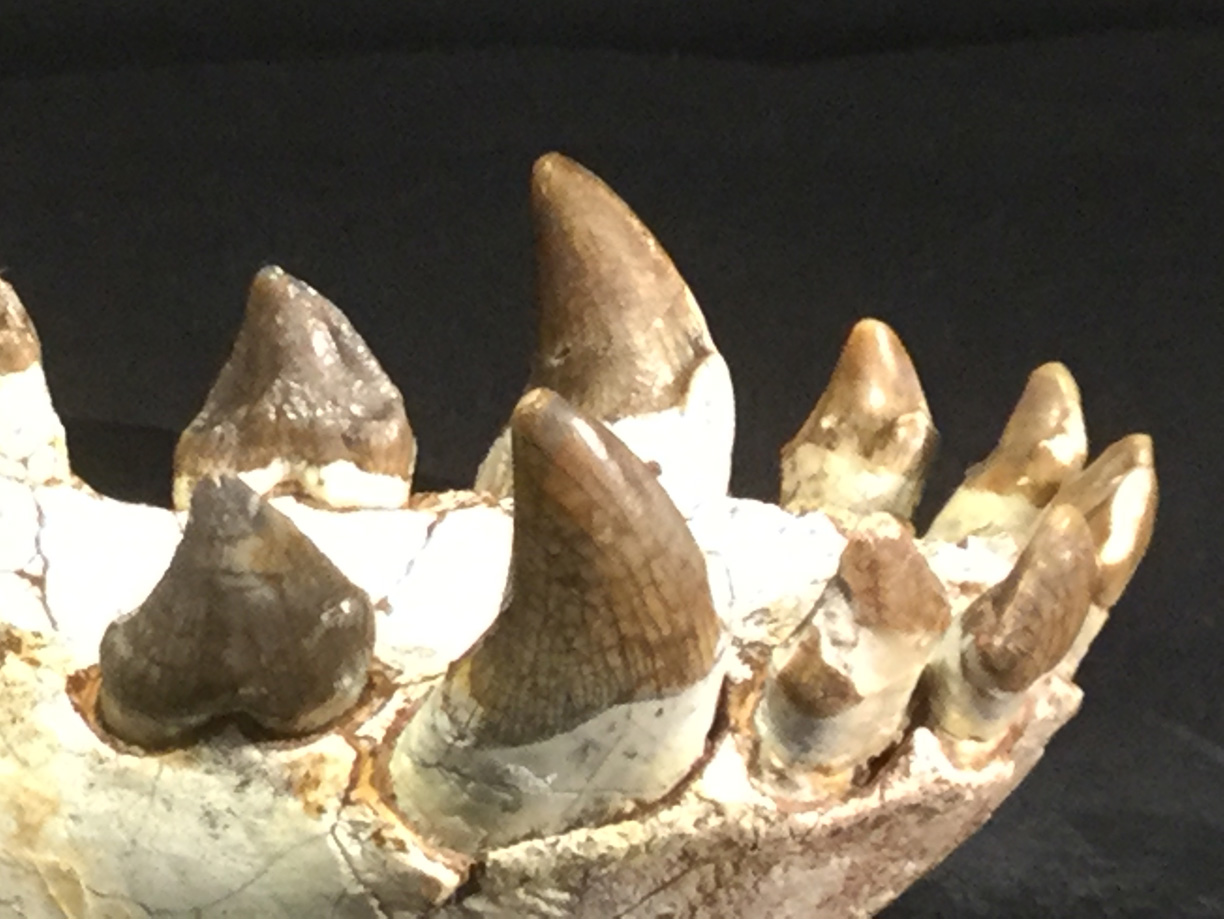 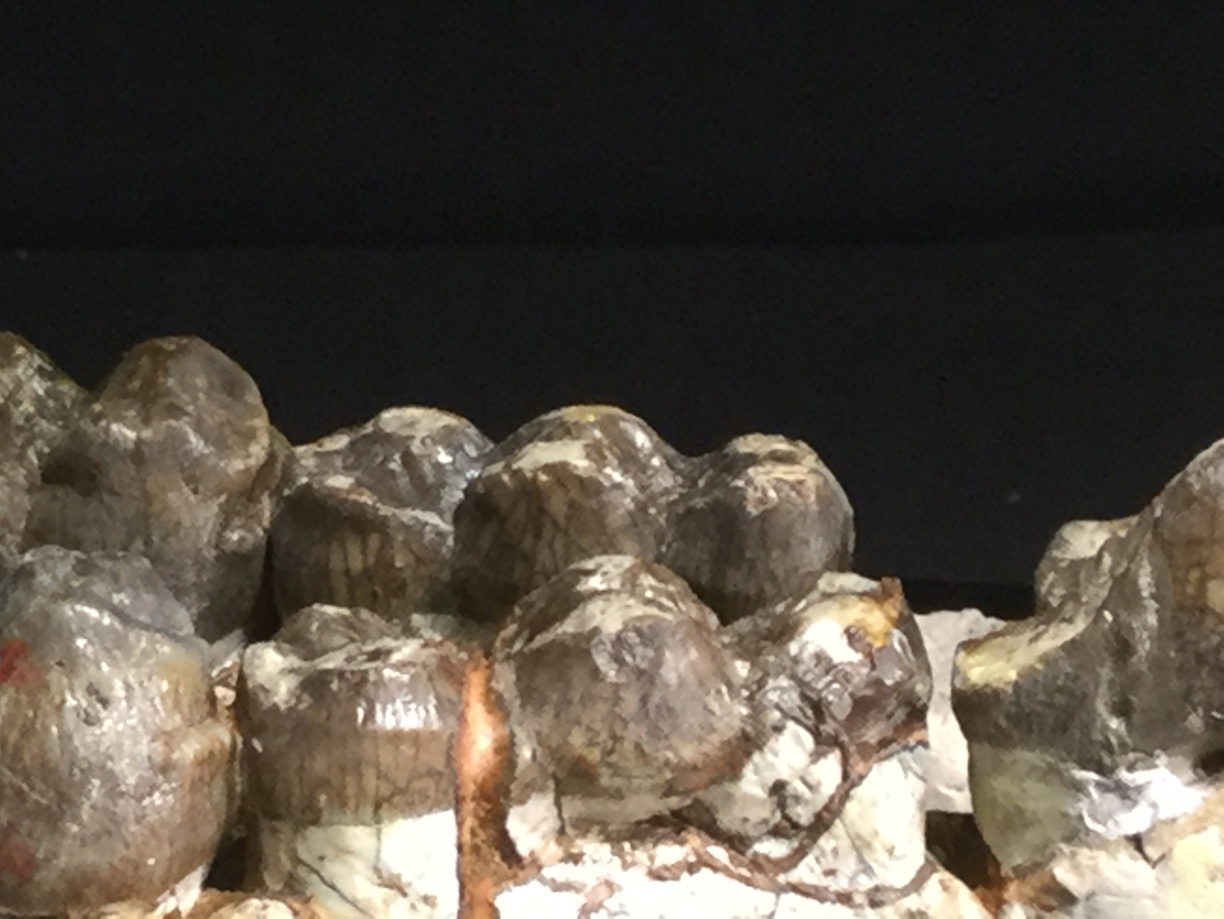 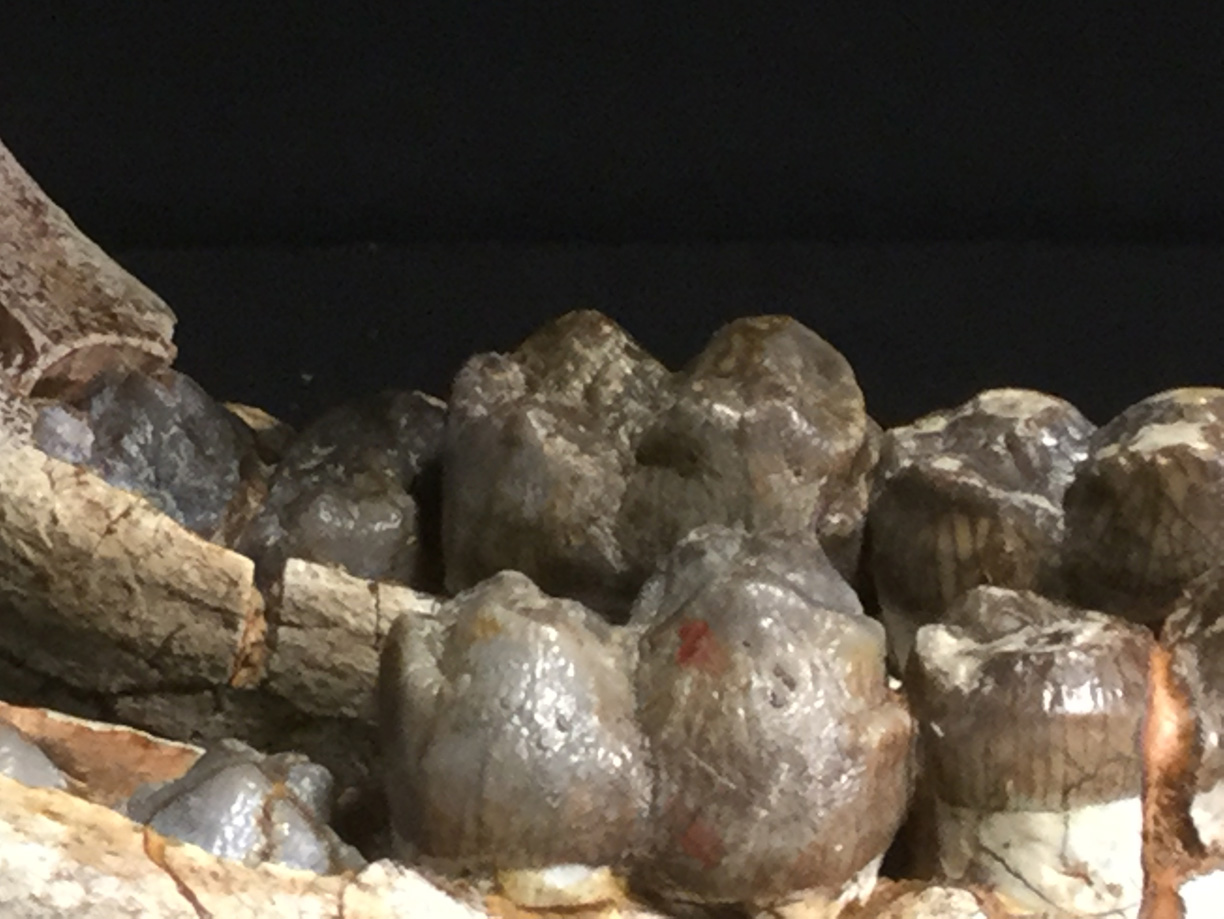 This is a remarkable specimen of a juvenile entelodont Archeotherium. This is a very complete example and shows some truly extraordinary features such as newly erupting molars. The specimen has been expertly prepared and although it does have minor restoration on the sagittal crest, in the zygomatic area and some spots on the lower jaw, it is a true museum piece. It is prepared completely free from matrix and comes with a display stand. The teeth are wonderfully preserved and even show serrations on the canines which disappear from wear in adults. The skull measures 16.25 inches in length.

Few fossils from the Badlands look more incredibly bizarre than the giant pig-like entelodonts. All five genera of this family are characterized by having long massive skulls packed with tusk-like canines, primitive pointed premolars and large, robust molars. Archaeotherium is probably the best known genus but Dinohyus, the last of this family, is the largest and their skulls reached five feet in length. Regardless, the entelodont's brain capacity is very small and they probably functioned largely on instinct.
Archaeotherium (meaning "ancient beast") is an extinct genus of entelodont artiodactyl endemic to North America during the Eocene and Oligocene epochs (38-24.8 mya), existing for approximately 6 million years.[1] Archaeotherium was about 1.2m tall at the shoulder and around 2m long and weighing around 270 kg. Although superficially pig-like, Archaeotherium, along with all other entelodonts, was more closely related to anthracotheres, hippopotamuses, and whales. Evidence from the Wyoming Dinosaur Center suggests that the omnivorous Archaeotherium, like many modern predatory mammals, kept caches of food for times when their hunting was less successful.

In life, Archaeotherium probably resembled a large, fanged, cow-sized peccary with bumps projecting from the side of its head. It had high shoulders, presumably to carry strong neck muscles to support the heavy head. The brain was tiny, but had relatively large olfactory lobes, suggesting that the animal had a keen sense of smell. The largest (and type) species, A. mortoni was a cow-sized predator. Rhino jaws and other mammal bones have been found with bite marks on them that match the large canines of A. mortoni. A fossil trackway in Toadstool Geologic Park depicts the path of a Subhyracodon walking forward, stopping to see an Archaeotherium approach, then breaking into a gallop with the entelodont chasing after it. In leaner times, it is suggested that Archaeotherium dug for roots and tubers, as with other pig-like mammals.