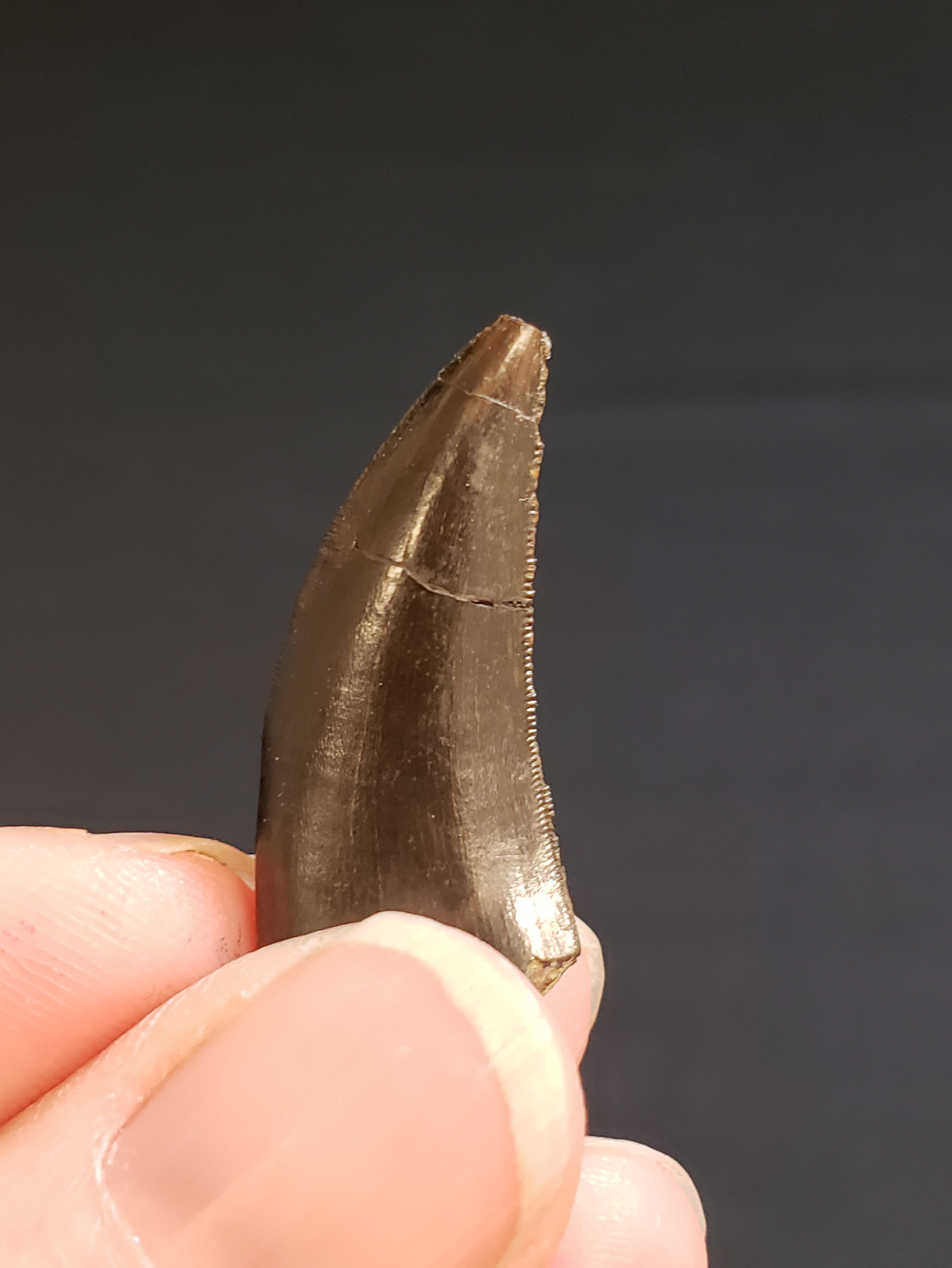 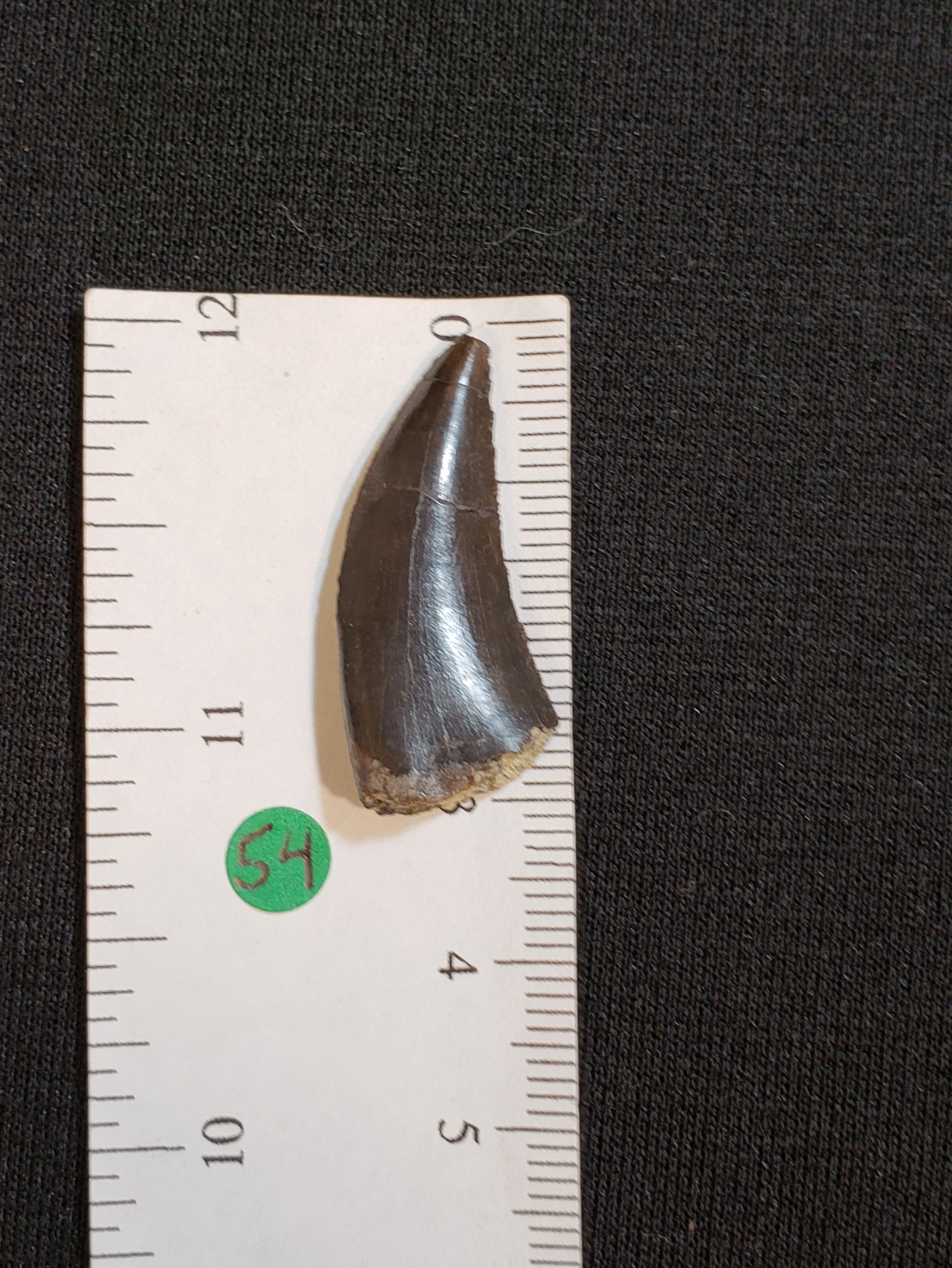 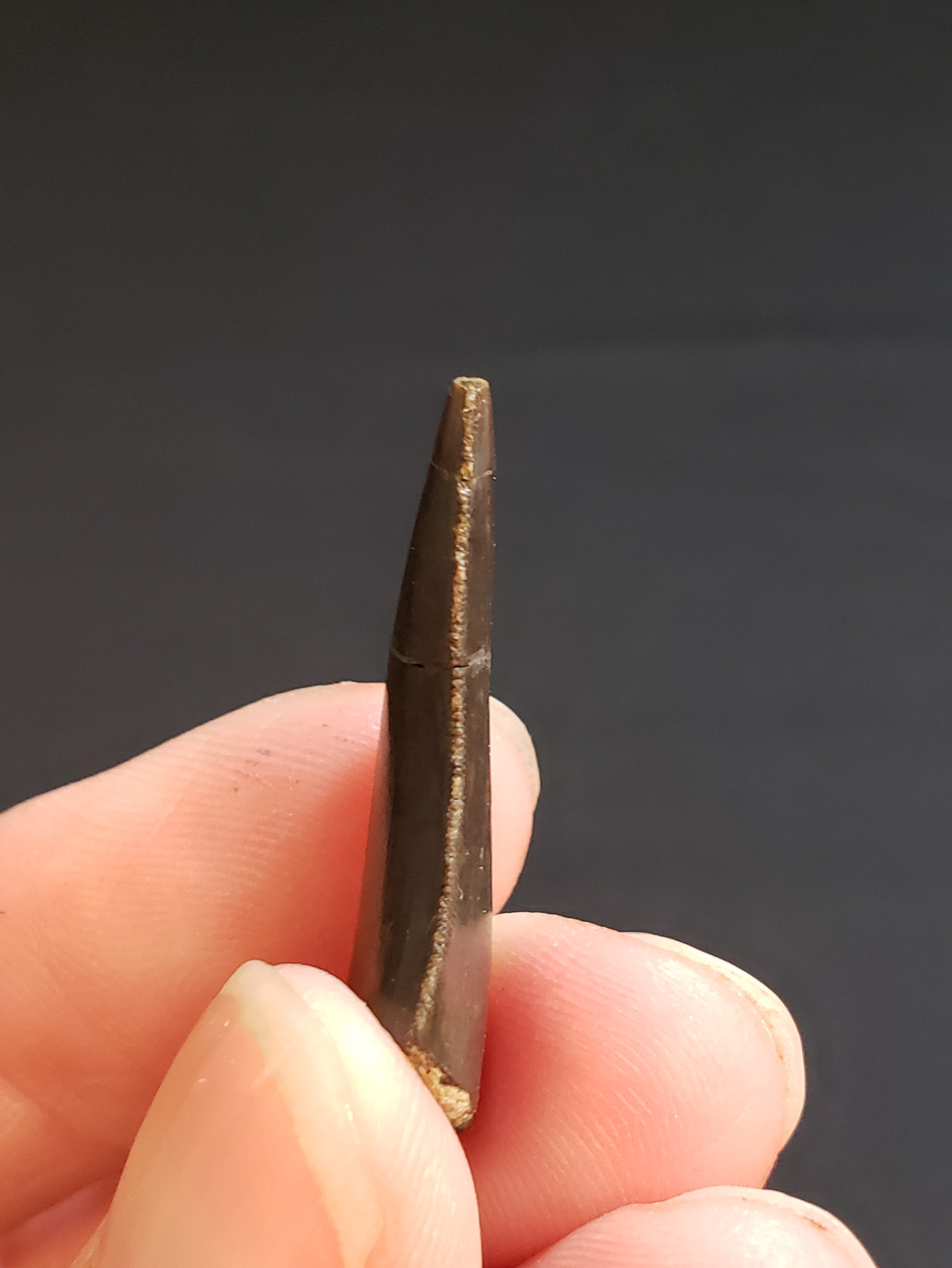 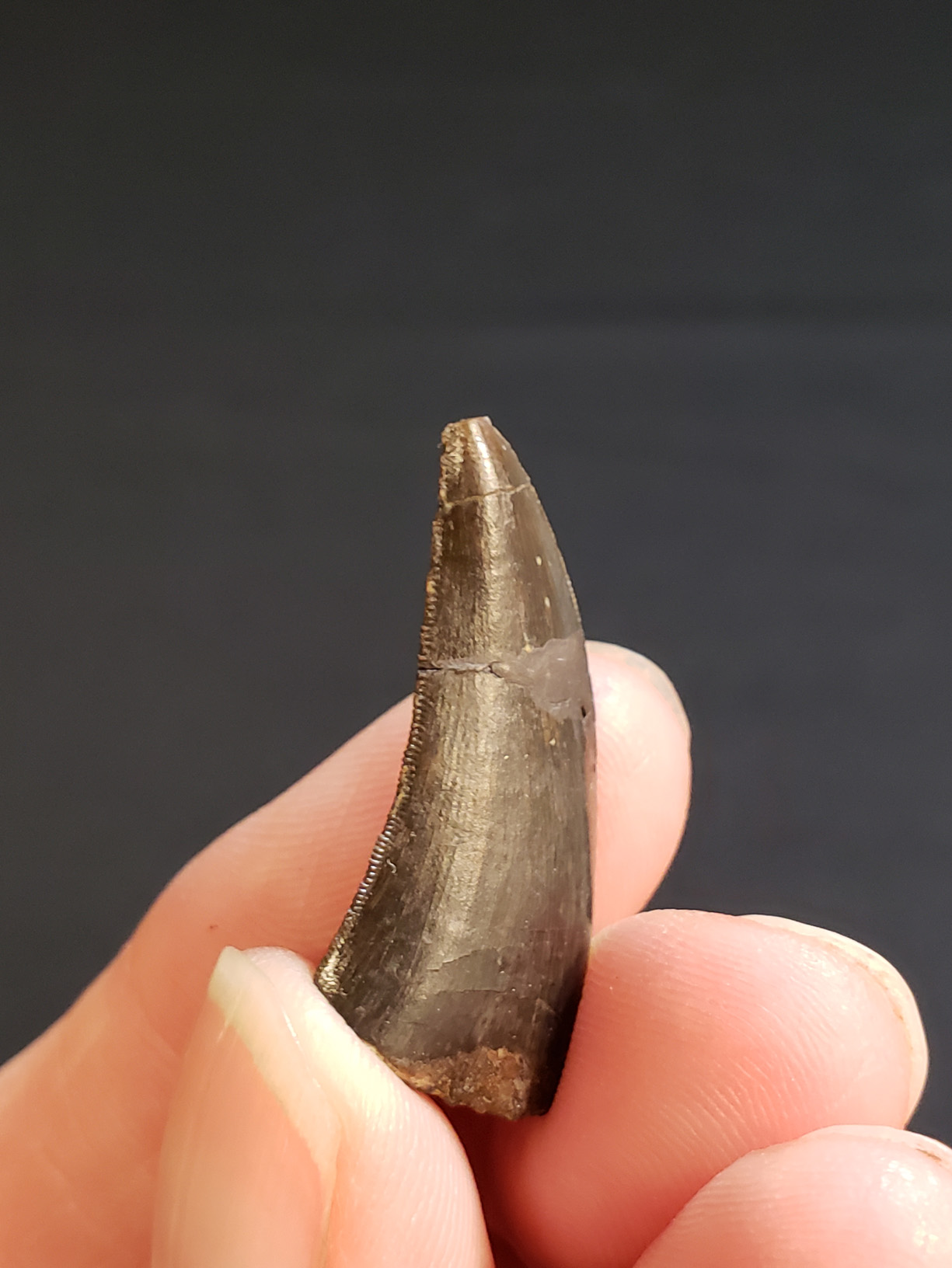 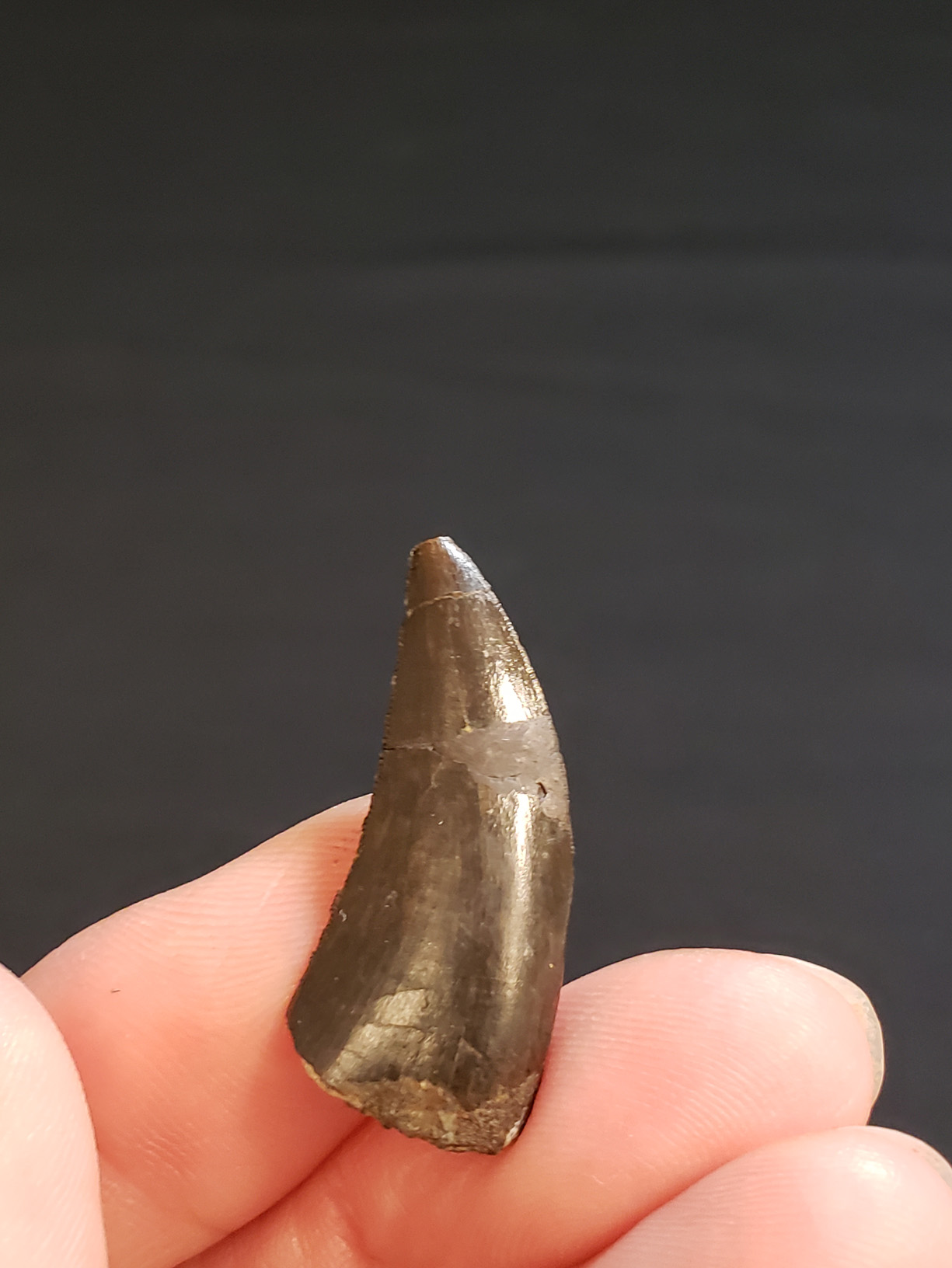 Here is a fine example of the very rare Morrison carnivorous dinosaur Marshosaurus. The tooth is 3 cm long. The tooth is slender in cross-section and the serrations are smaller than other Morrison carnivorous dinosaurs. The serrations on the anterior keel of the tooth extend two-thirds of the distance from tip to base. These features are diagnostic of the genus. The serrations on both the keels are very distinct. There is a 3 mm patch of restoration about one-third of the way down the anterior keel, otherwise the only restoration on this specimen is filling of a few tiny natural fractures.

Marshosaurus was medium-sized for a theropod. In 2010, Gregory S. Paul estimated its length at 4.5 meters and its weight at two hundred kilograms. The holotype ilium has a length of 375 millimeters. If the cranial material is correctly referred, the skull was about sixty centimeters long.
In 2012, Matthew Carrano established one autapomorphy, a unique derived trait of the holotype: the suture between the pubic peduncle and the pubic bone is convex, curving upwards, at the front and concave at the rear.
During the 1960s, over fourteen thousand fossil bones were uncovered at the Cleveland-Lloyd Quarry in central Utah. The majority of these belonged to Allosaurus but some were of at least two theropods new to science. In 1974 one of these was named by James Henry Madsen Jr. as the genus Stokesosaurus.
In 1976 the second was by Madsen named as the type species Marshosaurus bicentesimus. The generic name honoured the nineteenth century paleontologist Professor Othniel Charles Marsh, who described many dinosaur fossils during the Bone Wars. The specific name was chosen in honor of the bicentennial of the United States of America.
The holotype, UMNH VP 6373, was found in a layer of the Brushy Basin Member of the Morrison Formation dating from the late Kimmeridgian, approximately 155 - 152 mya. It is a left ilium, or upper pelvis bone. The paratypes consisted of three bones: the ischia UMNH VP 6379 and UMNH VP 380 and the pubic bone UMNH VP 6387. Three ilia and six jaw fragments were provisionally referred. The material represents at least three individuals.
In 1991 Brooks Britt referred tail vertebrae from Colorado, because they resembled non-identified tail vertebrae fragments from the Cleveland-Lloyd Dinosaur Quarry. In 1993 a partial skeleton, CMNH 21704, from the Dinosaur National Monument was referred because its spines resembled non-identified spines from the Cleveland-Lloyd Dinosaur Quarry. This specimen was more completely described in 1997.
Madsen originally was unsure about the phylogenetic position of Marshosaurus, placing it as Theropoda incertae sedis. Some later analyses showed Marshosaurus to be a member of Avetheropoda, a group of more bird-like theropods including Tyrannosaurus, Velociraptor and Allosaurus. However, Roger Benson (et al., 2009) found it to be a Megalosauroid, using a lot of newly found characters of referred Megalosaurus specimens.
The Morrison Formation is a sequence of shallow marine and alluvial sediments which, according to radiometric dating, ranges between 156.3 million years old (Ma) at its base, to 146.8 million years old at the top, which places it in the late Oxfordian, Kimmeridgian, and early Tithonian stages of the Late Jurassic period. This formation is interpreted as a semiarid environment with distinct wet and dry seasons. The Morrison Basin where dinosaurs lived, stretched from New Mexico to Alberta and Saskatchewan, and was formed when the precursors to the Front Range of the Rocky Mountains started pushing up to the west. The deposits from their east-facing drainage basins were carried by streams and rivers and deposited in swampy lowlands, lakes, river channels and floodplains. This formation is similar in age to the Solnhofen Limestone Formation in Germany and the Tendaguru Formation in Tanzania. In 1877 this formation became the center of the Bone Wars, a fossil-collecting rivalry between early paleontologists Othniel Charles Marsh and Edward Drinker Cope.

$700
Purchase
Jurassic Morrison Marshosaurus Tooth has been added to your cart.
Continue Shopping Checkout Now
© fossilAvenue.com
HOME
ABOUT US
PRODUCT CATALOG
CONTACT US