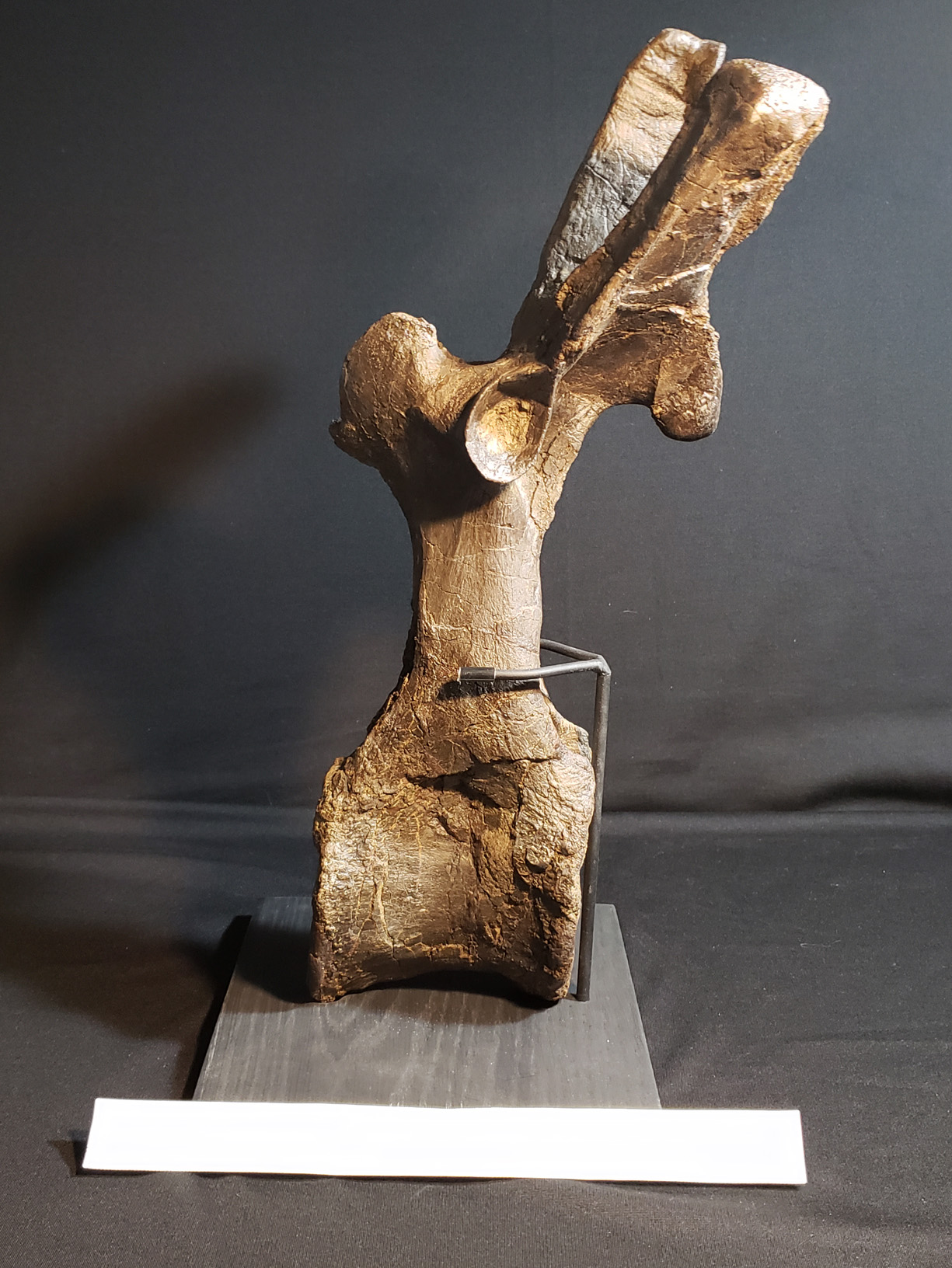 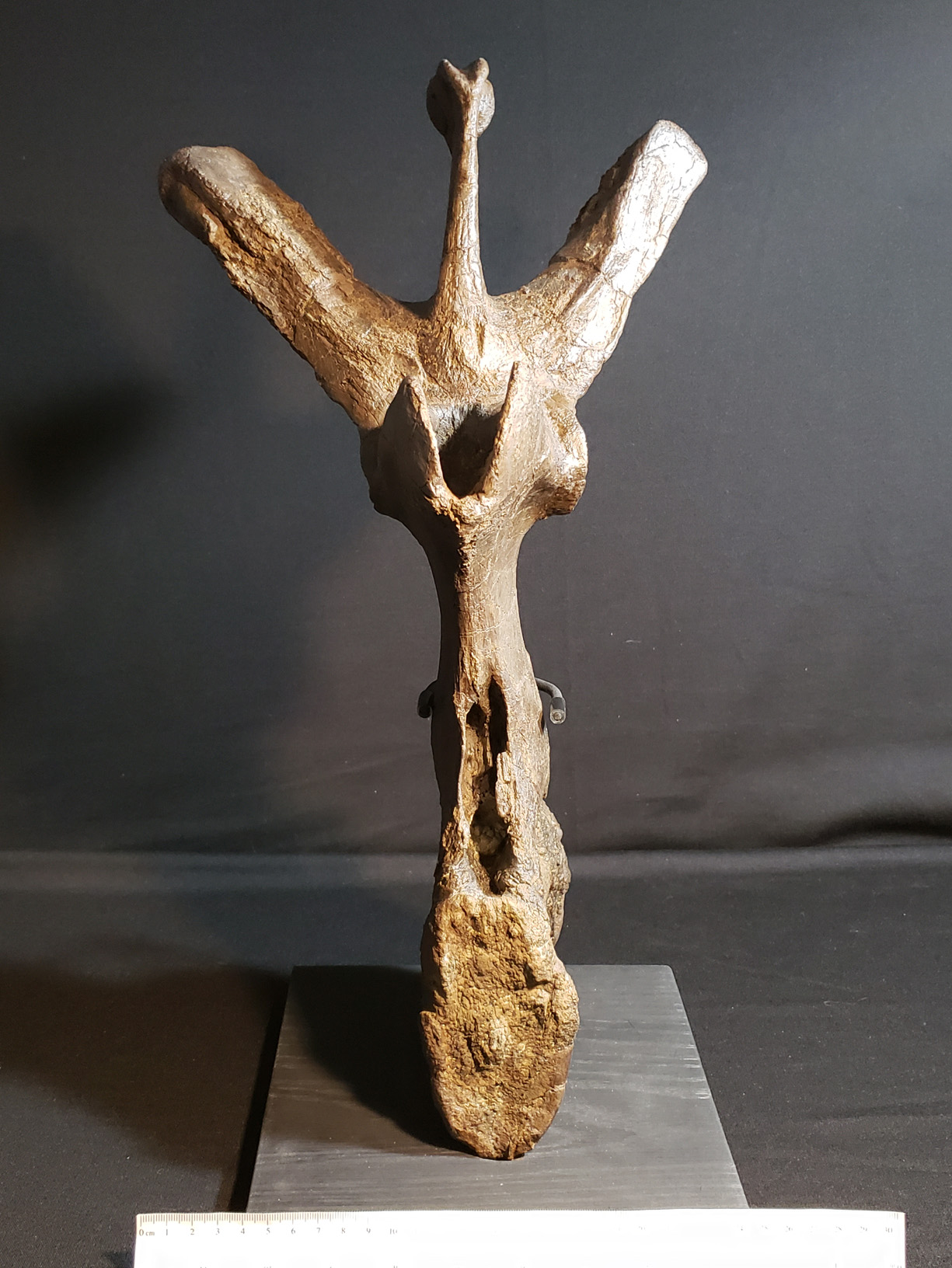 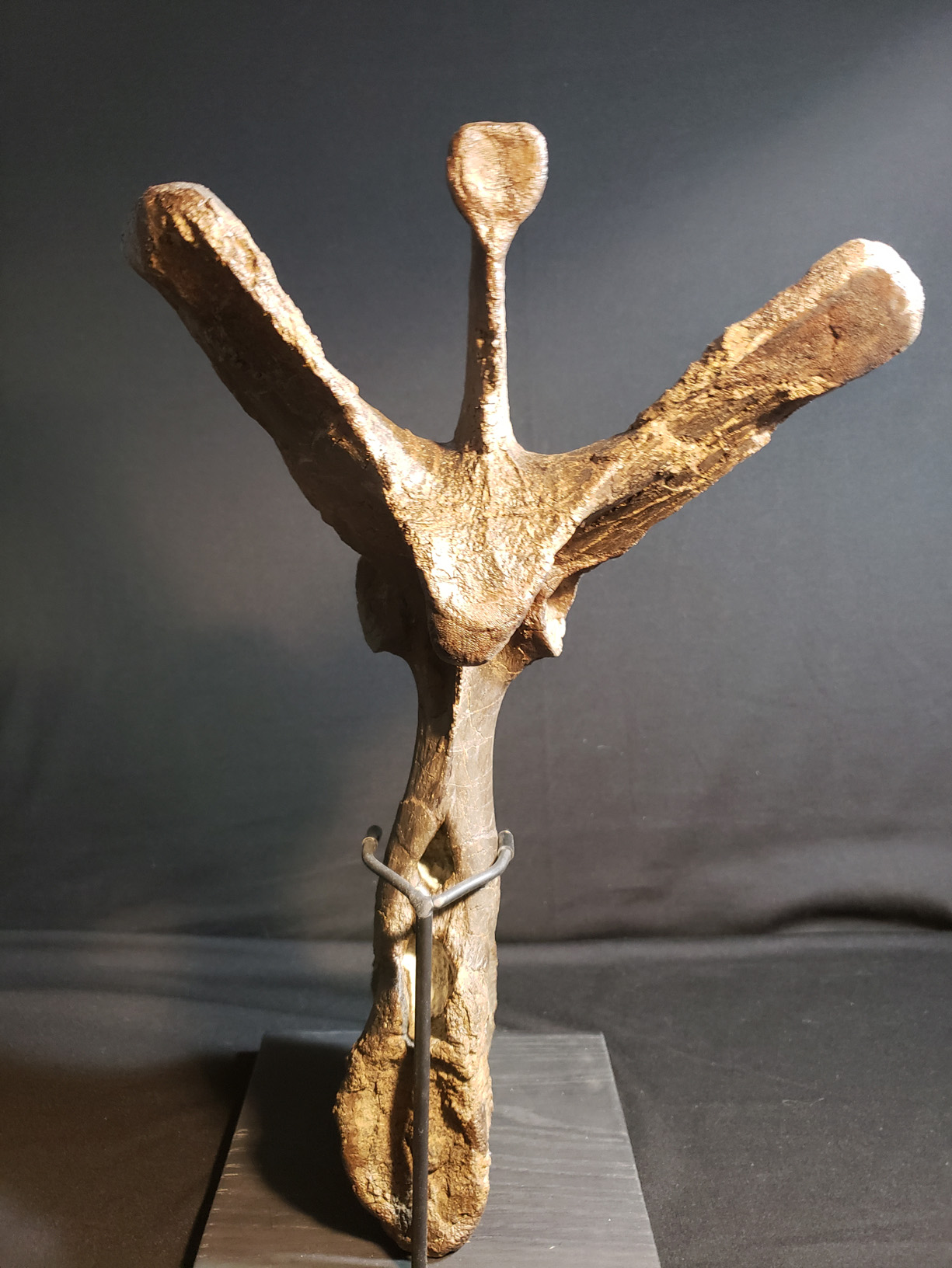 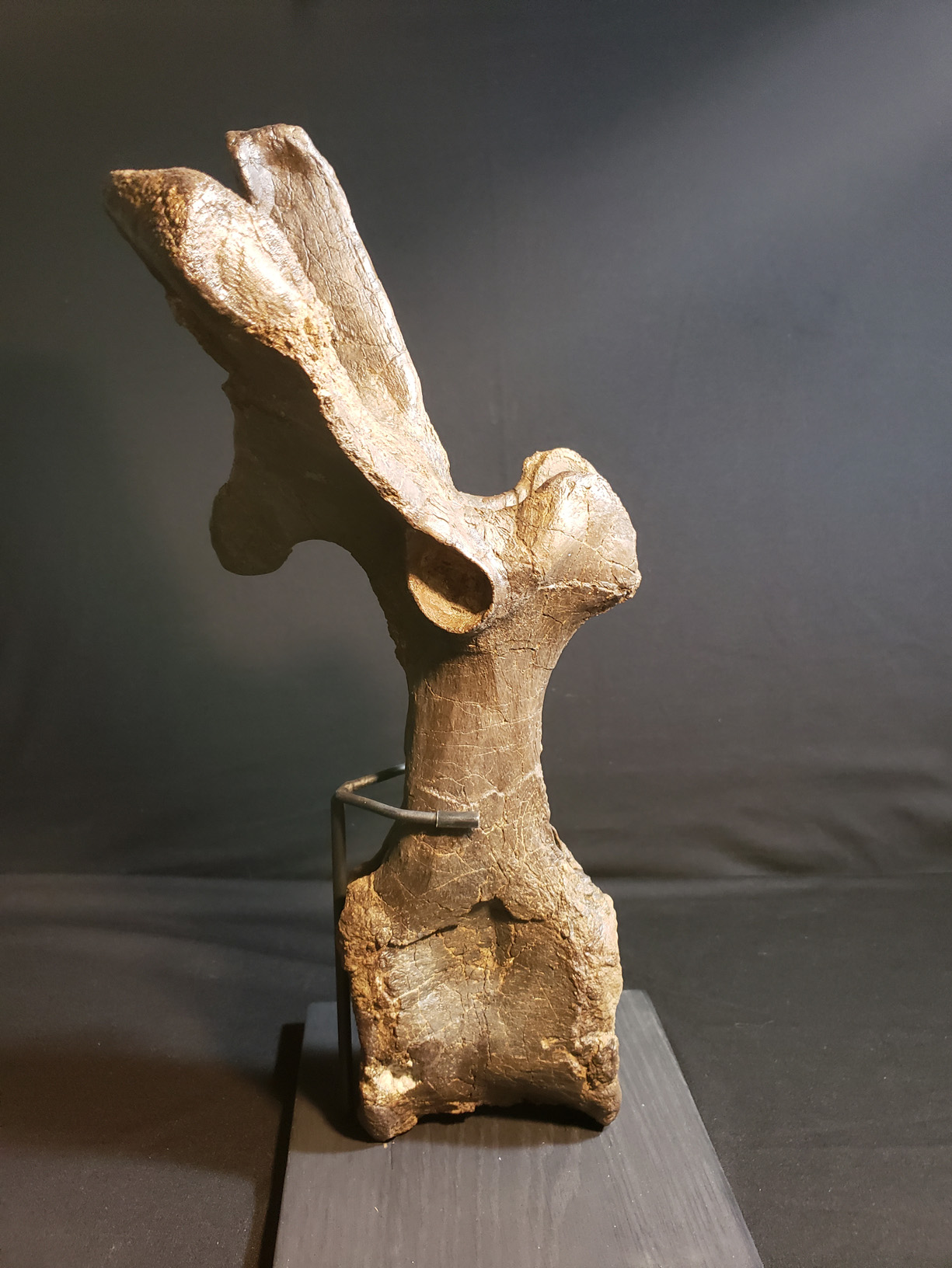 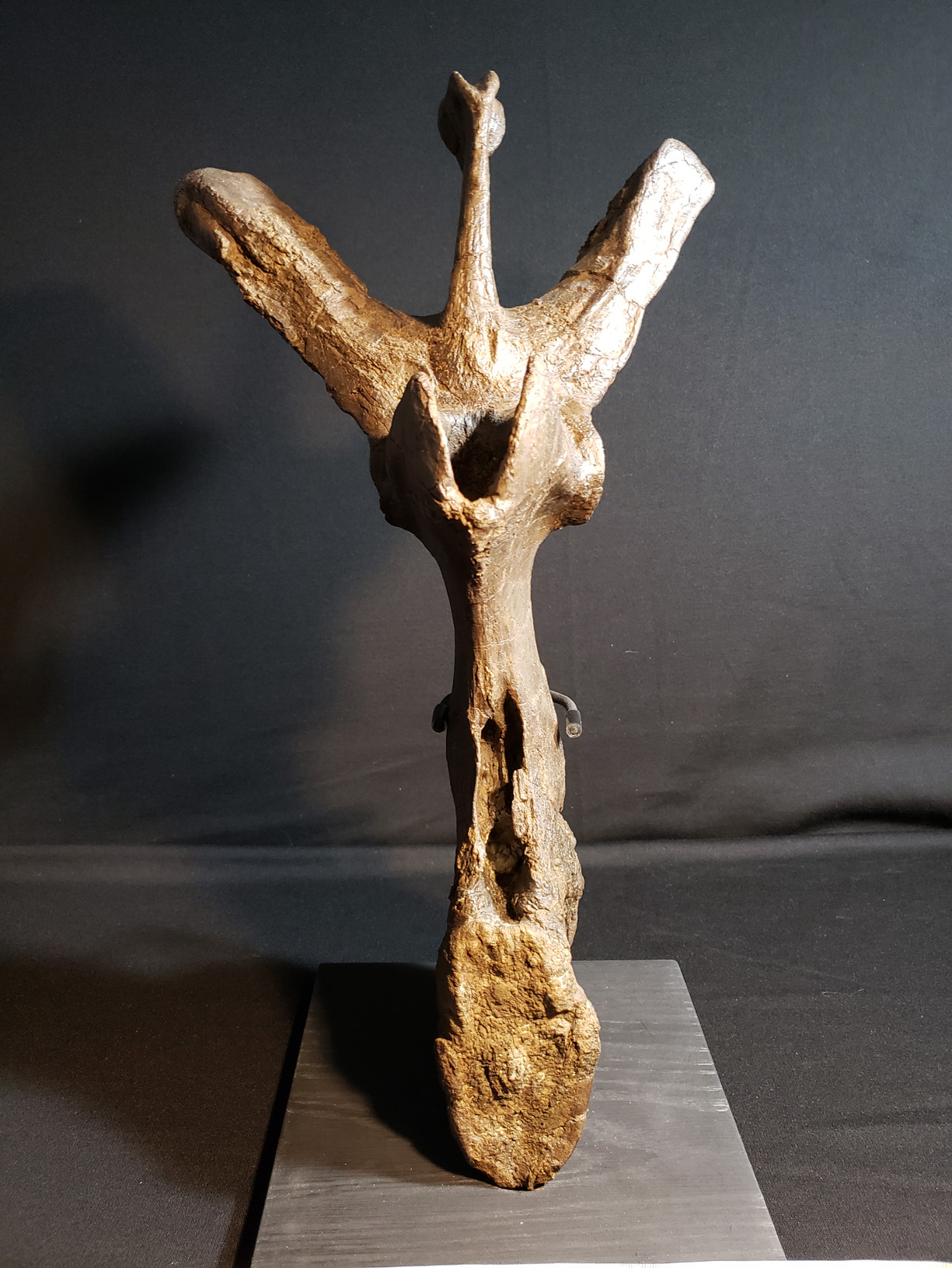 Here is an excellent dorsal vertebrae of a large Stegosaurus ungulatus. This dramatic specimen is from the Brushy Basin Member of the Morrison Formation. The specimen is 17.5 inches tall and has a 4 inch centrum. The preservation is quite good and is a very complete example of this fragile bone. The top 3.5 inches of the central neural spine is restored and portions of both diapopyses have areas of restoration. There are other small areas and fractures that have restoration. The centrum is laterally compressed from burial. Overall, however this specimen presents a splendid display example.

Stegosaurus, from Greek stegos which means roof and sauros which means lizard, is a genus of herbivorous thyreophoran dinosaur. Fossils of this genus date to the Late Jurassic period, where they are found in Kimmeridgian to early Tithonian aged strata, between 155 and 150 million years ago, in the western United States and Portugal. Of the species that have been classified in the upper Morrison Formation of the western US, only three are universally recognized; S. stenops, S. ungulatus and S. sulcatus. The remains of over 80 individual animals of this genus have been found. Stegosaurus would have lived alongside dinosaurs such as Apatosaurus, Diplodocus, Brachiosaurus, Allosaurus, and Ceratosaurus; the latter two may have been predators of it.
These were large, heavily built, herbivorous quadrupeds with rounded backs, short fore-limbs, long hind limbs, and tails held high in the air. Due to their distinctive combination of broad, upright plates and tail tipped with spikes, Stegosaurus is one of the most recognizable kinds of dinosaurs. The function of this array of plates and spikes has been the subject of much speculation among scientists. Today, it is generally agreed that their spiked tails were most likely used for defense against predators, while their plates may have been used primarily for display, and secondarily for thermoregulatory functions. Stegosaurus had a relatively low brain-to-body mass ratio. It had a short neck and a small head, meaning it most likely ate low-lying bushes and shrubs. One species, Stegosaurus ungulatus, is the largest known of all the stegosaurians.
Stegosaurus remains were first identified during the "Bone Wars" by Othniel Charles Marsh. The first known skeletons were fragmentary and the bones were scattered, and it would be many years before the true appearance of these animals, including their posture and plate arrangement, became well understood. Despite its popularity in books and film, mounted skeletons of Stegosaurus did not become a staple of major natural history museums until the mid-20th century, and many museums have had to assemble composite displays from several different specimens due to a lack of complete skeletons. Stegosaurus is one of the best-known dinosaurs, and has been featured in film, postal stamps, and many other types of media.