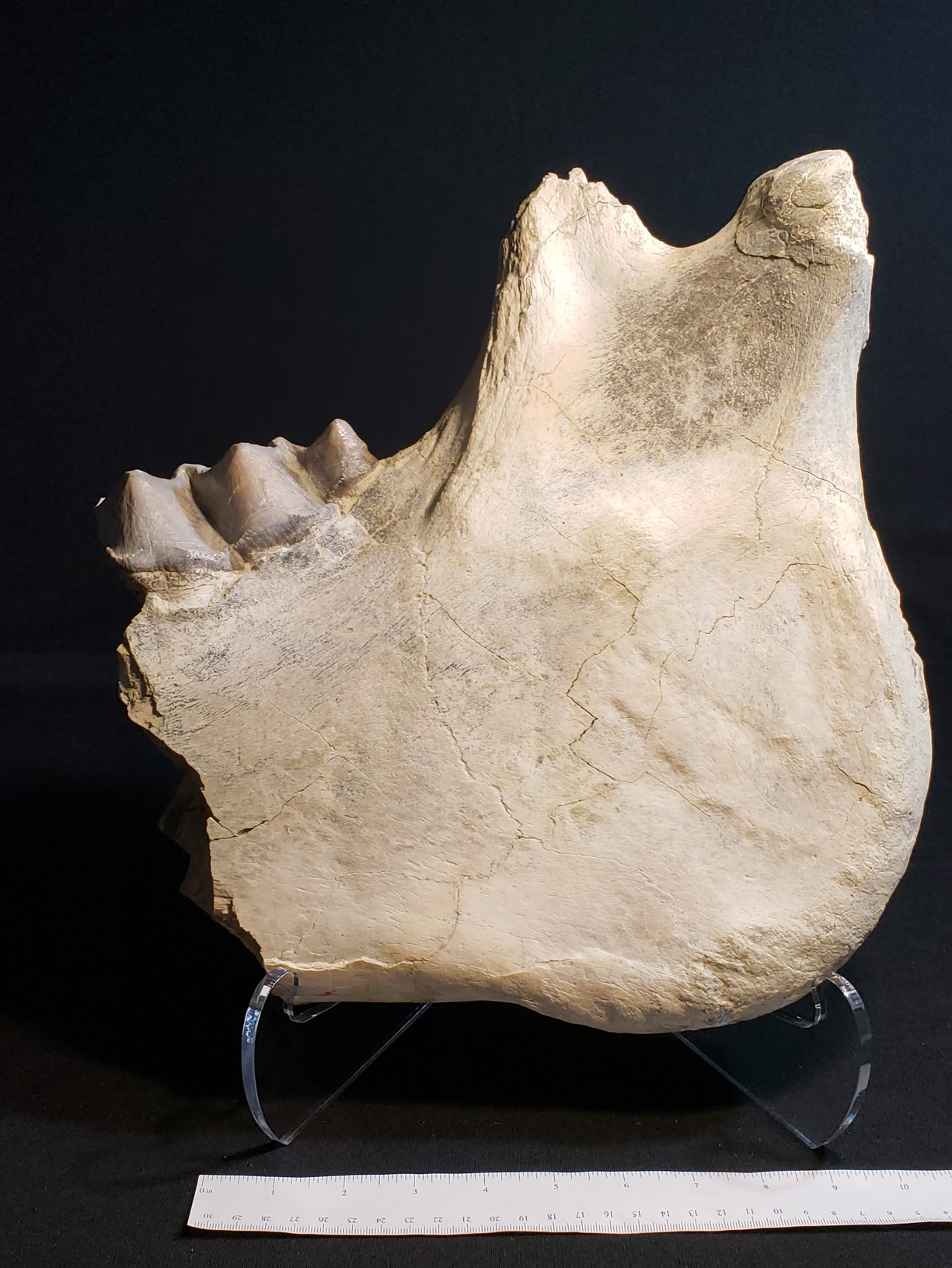 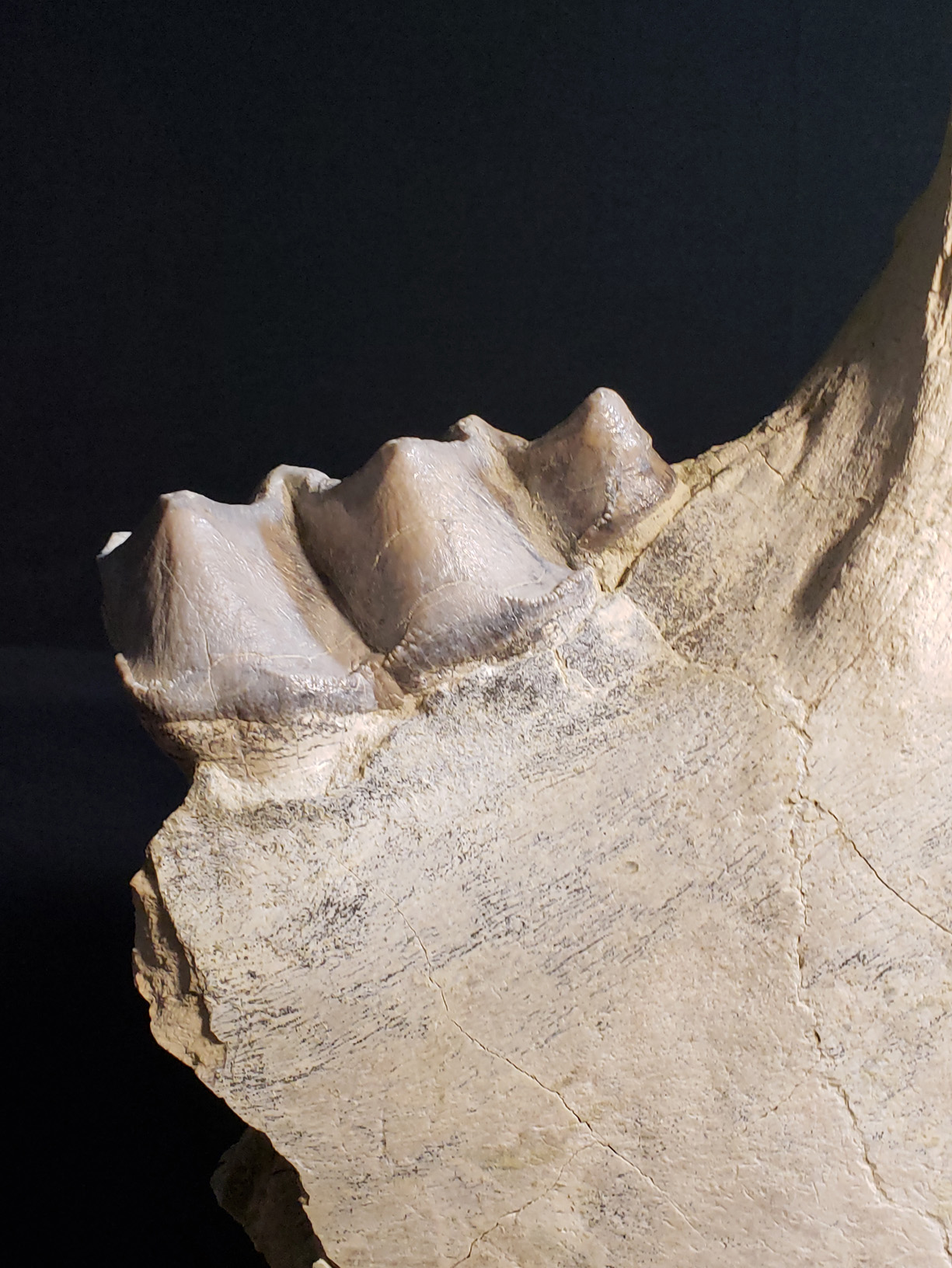 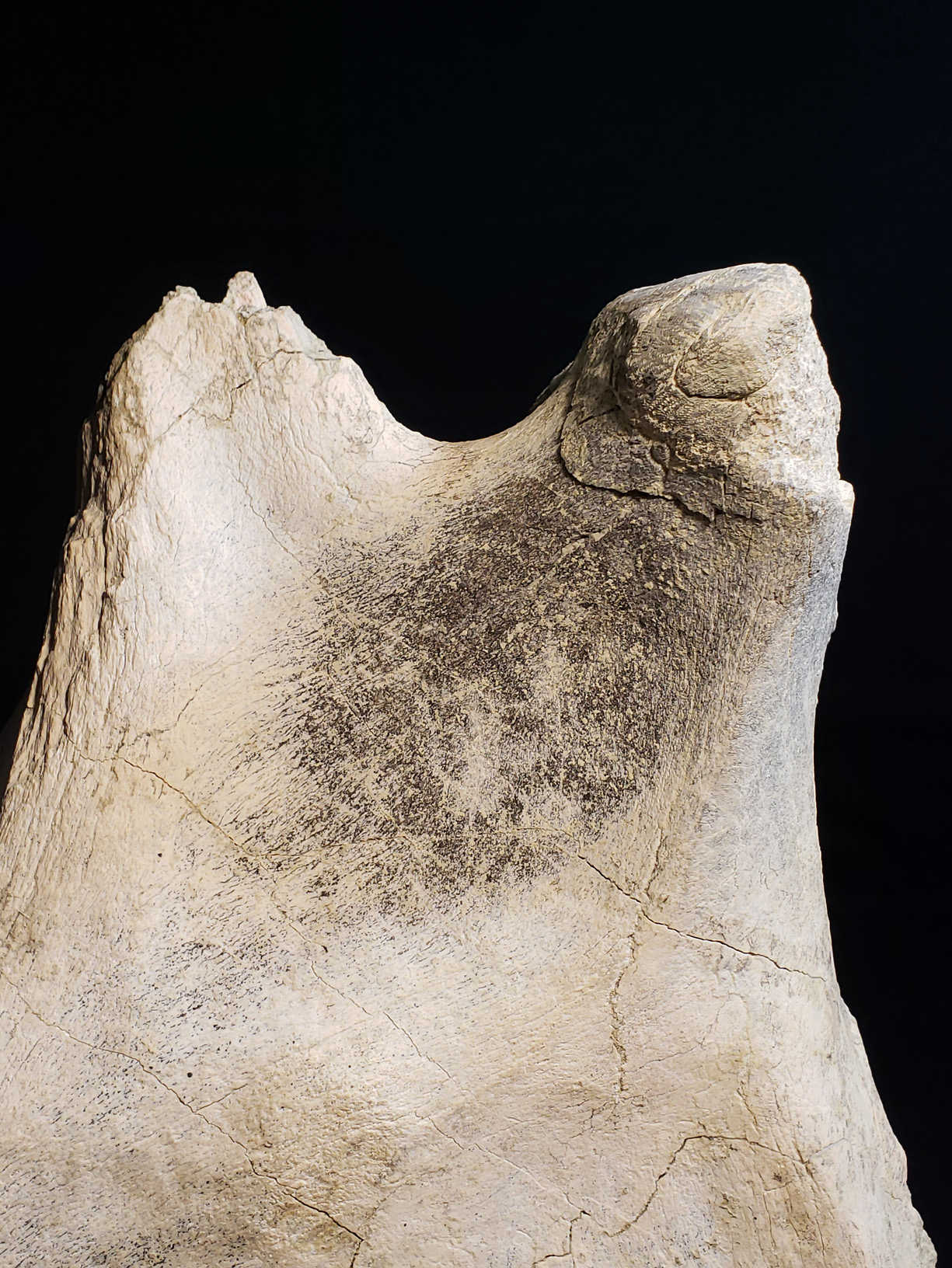 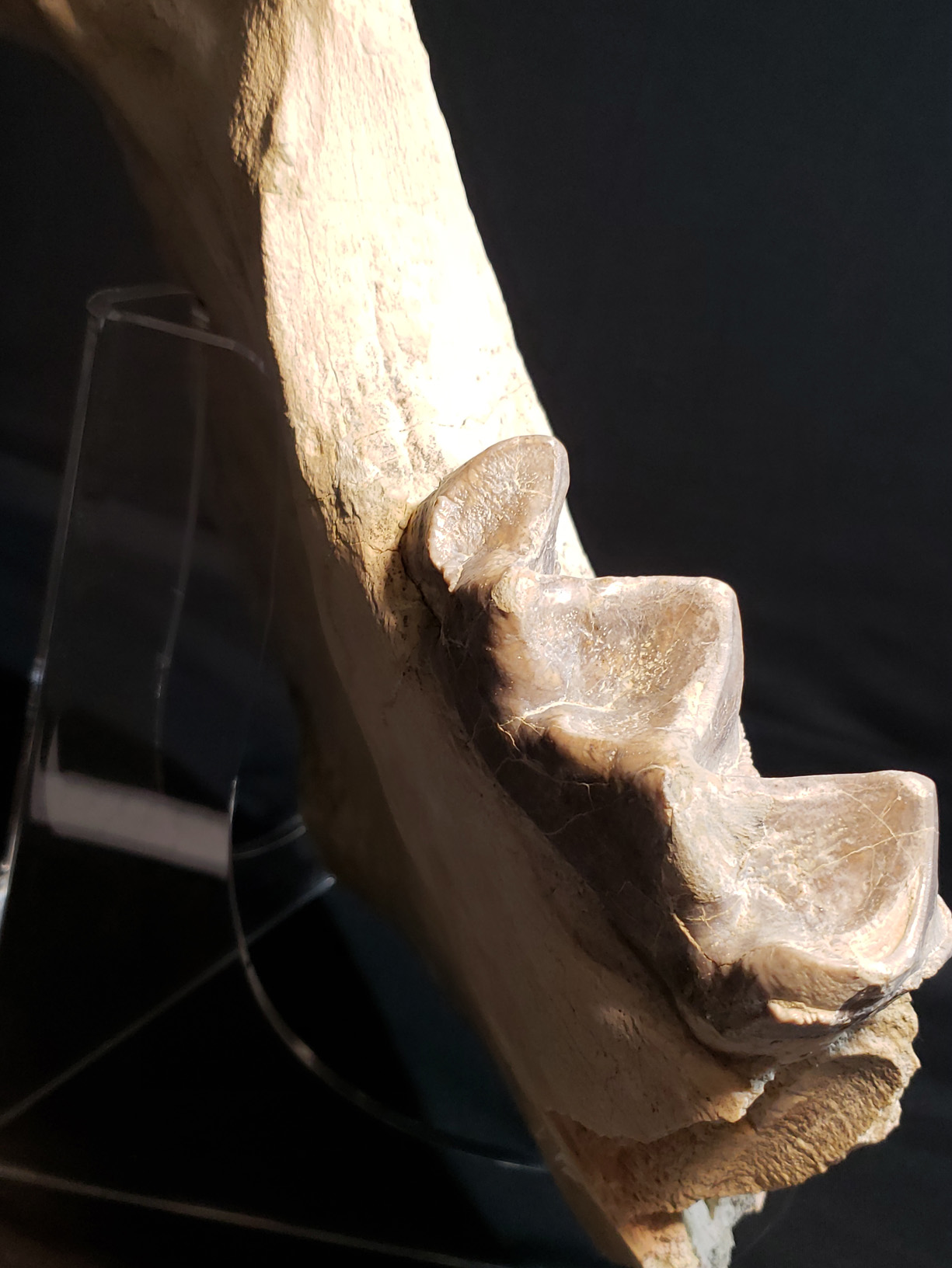 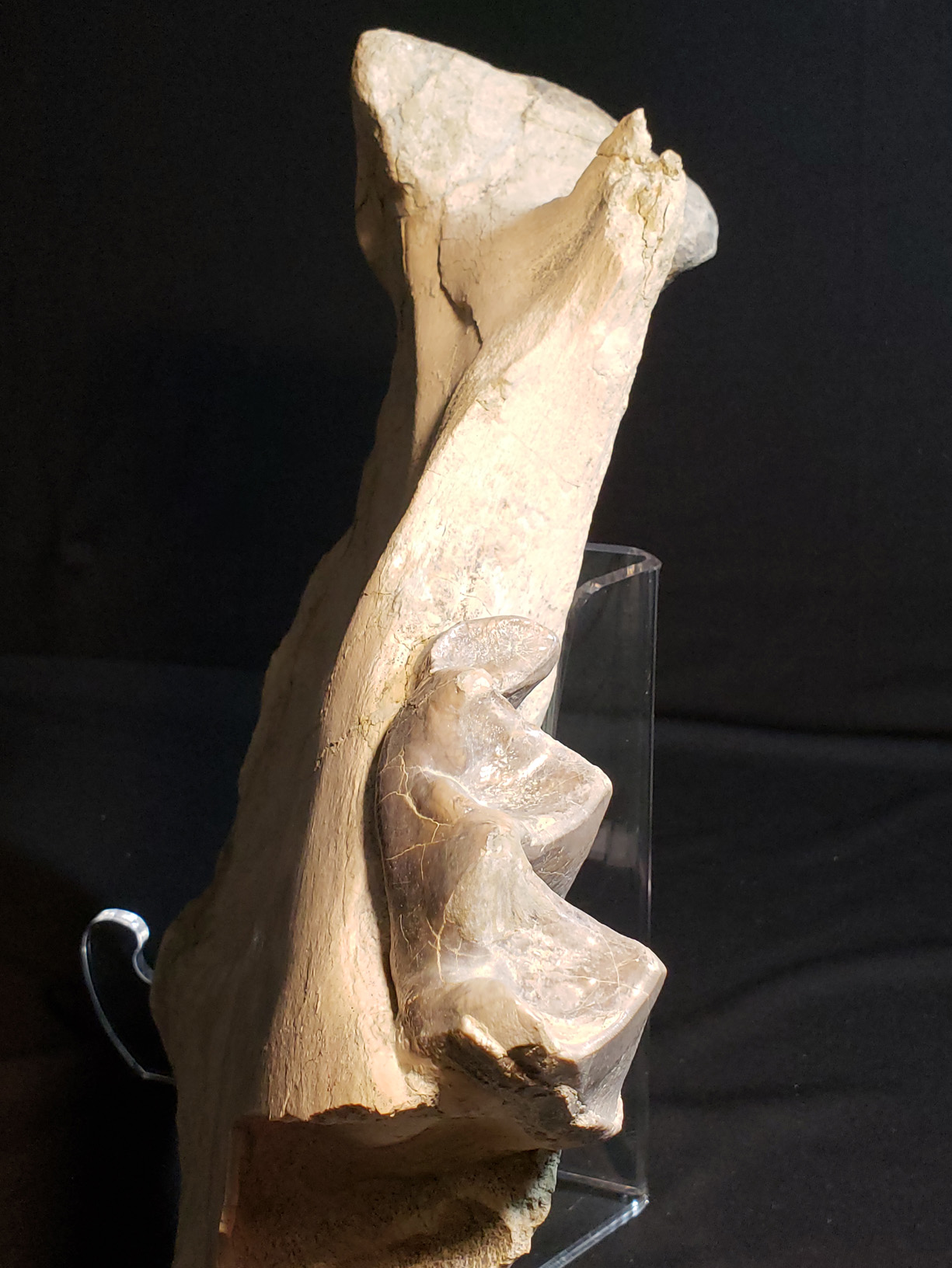 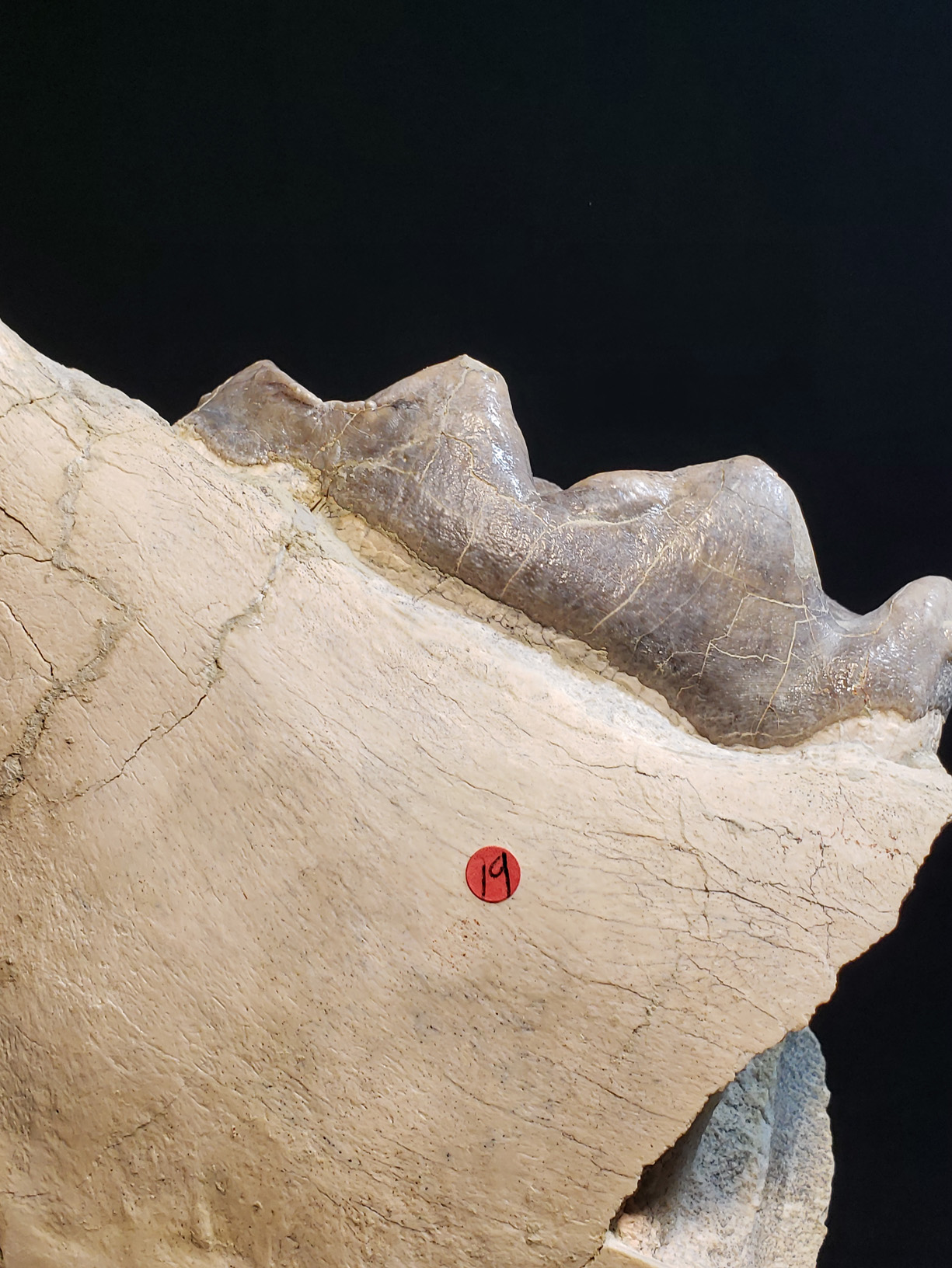 Megaceraops is a member of the Brontotheriidae, also called Titanotheriidae, and is a family of extinct mammals belonging to the order Perissodactyla, the order that includes horses, rhinoceroses, and tapirs. Superficially, they looked rather like rhinos, although they were actually more closely related to horses; Equidae and Brontotheriidae make up the suborder Hippomorpha. They lived around 56–34 million years ago, until the very close of the Eocene.
Brontotheres retain four toes on their front feet and three toes on their hind feet. Their teeth are adapted to shearing (cutting) relatively nonabrasive vegetation. Their molars have a characteristic W-shaped ectoloph (outer shearing blade).
The evolutionary history of this group is well known due to an excellent fossil record in North America.[1] The earliest brontotheres, such as Eotitanops, were rather small, no more than a meter in height, and hornless.
Brontotheres evolved massive bodies, although some small species such as Nanotitanops did persist through the Eocene. Some genera, such as Dolichorhinus, evolved highly elongated skulls. Later brontotheres were massive, up to 2.5 m (8.2 ft) tall with horn-like skull appendages. The North American brontothere Megacerops, for example, evolved large sexually dimorphic paired horns above their noses. The sexually dimorphic horns suggest that brontotheres were highly gregarious (social) and males may have performed some sort of head-clashing behavior in competition for mates. Unlike rhinoceros, however, the horns of brontotheres are composed of bone (the frontal bone and nasal bone) and were placed side-to-side rather than front-to-back.
Brontotheres probably became extinct because they could not adapt to drier conditions and tougher vegetation (such as grasses) that spread during the Oligocene.

$1250
Purchase
Eocene Chadron Megacerops has been added to your cart.
Continue Shopping Checkout Now
© fossilAvenue.com
HOME
ABOUT US
PRODUCT CATALOG
CONTACT US