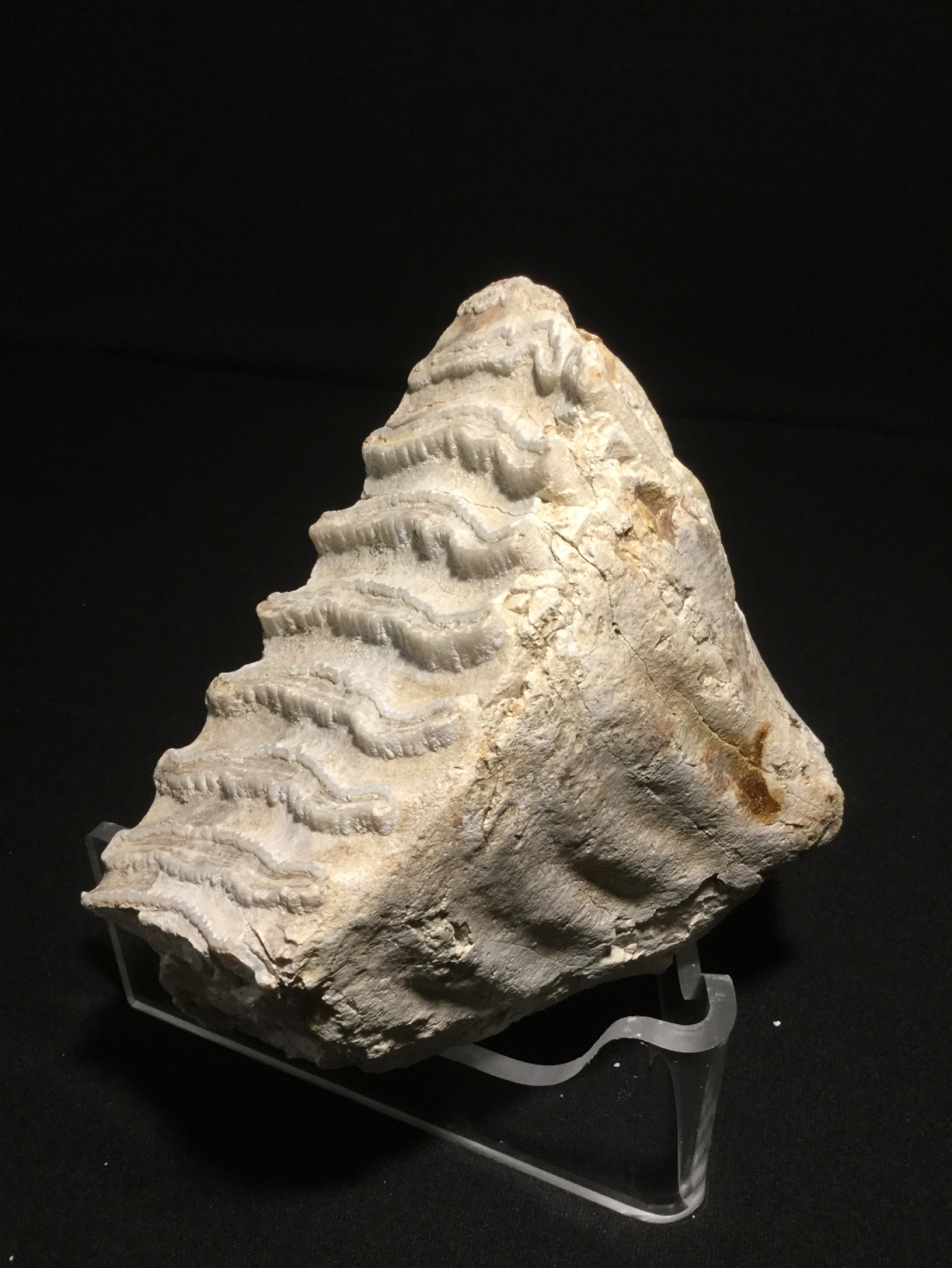 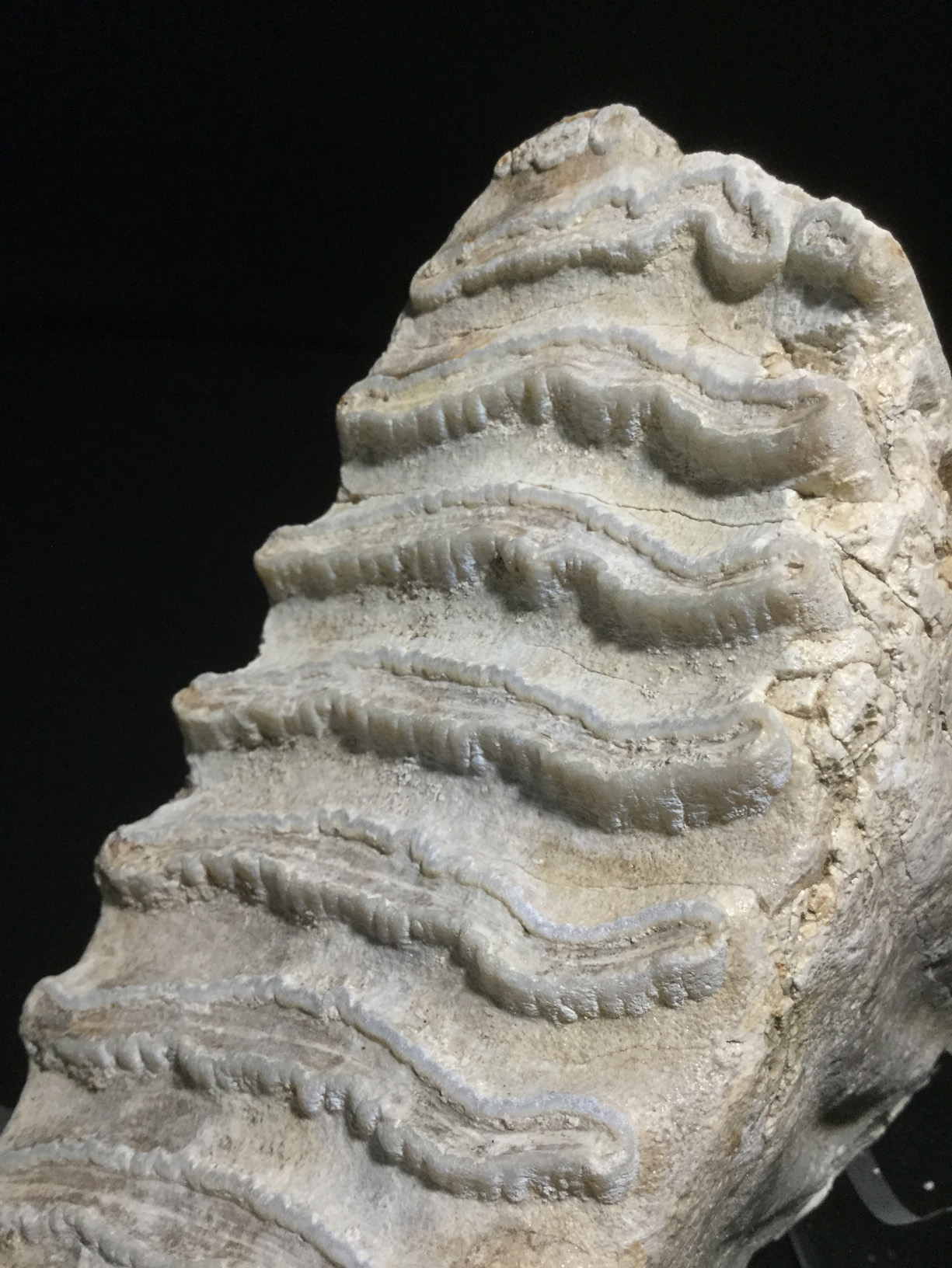 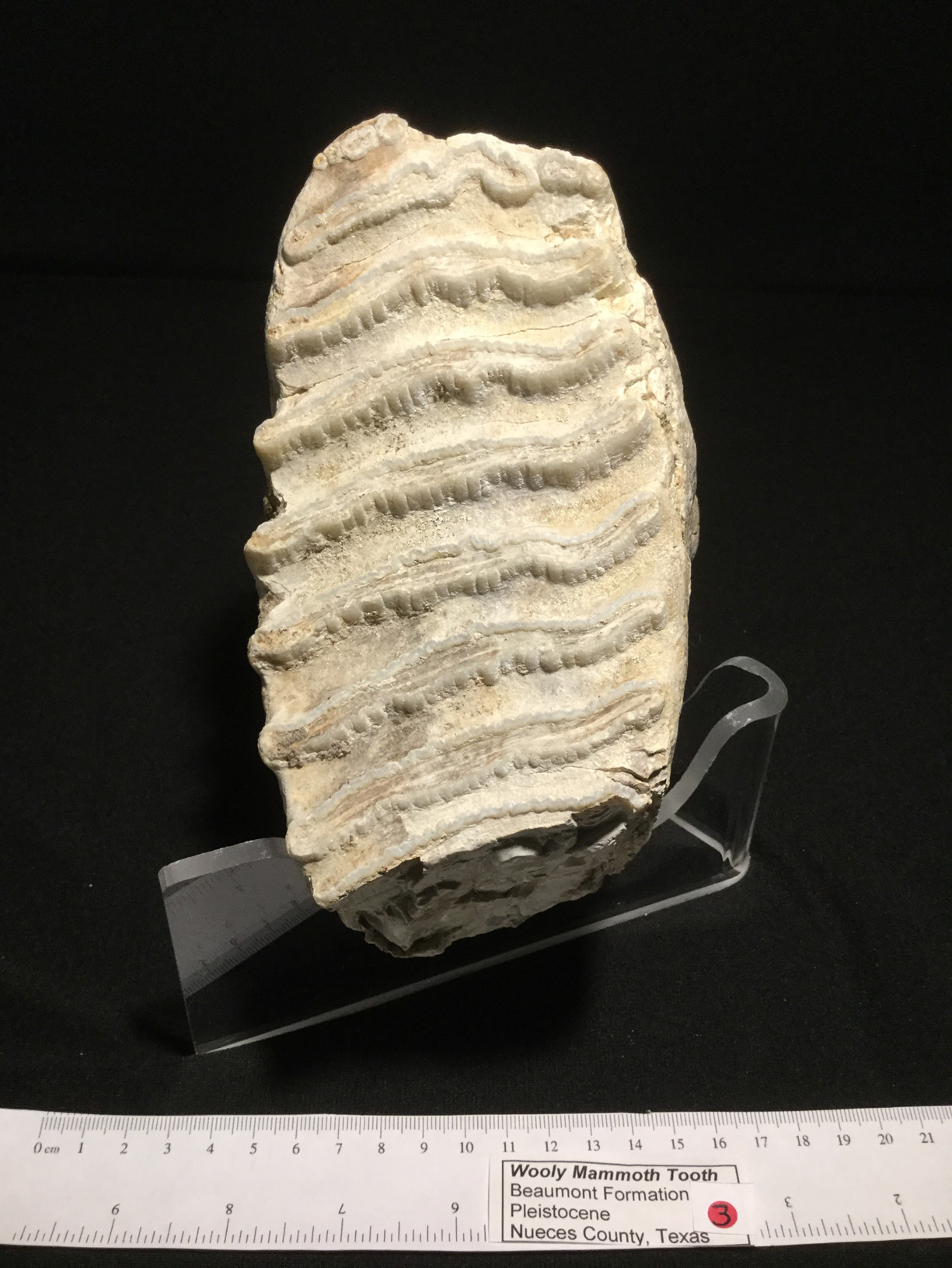 Here is a partial but very good quality mammoth molar from Texas. The tooth is nearly complete and is about 6 inches long. The wear surface has very fine detail. This example has no restoration or repair.

The Columbian mammoth (Mammuthus columbi) is an extinct species of mammoth that inhabited North America as far north as the northern United States and as far south as Costa Rica during the Pleistocene epoch. It was one of the last in a line of mammoth species, beginning with M. subplanifrons in the early Pliocene. The Columbian mammoth evolved from the steppe mammoth, which entered North America from Asia about 1.5 million years ago. The pygmy mammoths of the Channel Islands of California evolved from Columbian mammoths. The closest extant relative of the Columbian and other mammoths is the Asian elephant.

Reaching 4 m (13 ft) at the shoulders and 10 tonnes (22,000 lb) in weight, the Columbian mammoth was one of the largest species of mammoth. It had long, curved tusks and four molars, which were replaced six times during the lifetime of an individual. It most likely used its tusks and trunk like modern elephants for manipulating objects, fighting, and foraging. Bones, hair, dung and stomach contents have been discovered, but no preserved carcasses are known. The Columbian mammoth preferred open areas, such as parkland landscapes, and fed on sedge, grass, and other plants. It did not live in the Arctic regions of Canada, which were instead inhabited by woolly mammoths. The ranges of the two species may have overlapped, and genetic evidence suggests that they interbred. Several sites contain the skeletons of multiple Columbian mammoths, either because they died in a single incident such as a flash flood, or because these locations were natural traps in which individuals accumulated over time.

For a few thousand years prior to their extinction, Columbian mammoths coexisted in North America with Palaeoamericans (the first humans to inhabit the Americas) who hunted them for food, used their bones for making tools, and depicted them in ancient art. Columbian mammoth remains have been found in association with Clovis culture artifacts; these remains may have stemmed either from hunting or from scavenging. The Columbian mammoth disappeared at the end of the Pleistocene around 11,000 years ago, most likely as a result of habitat loss caused by climate change, hunting by humans, or a combination of both.

$800
Purchase
Pleistocene Wooly Mammoth Tooth has been added to your cart.
Continue Shopping Checkout Now
© fossilAvenue.com
HOME
ABOUT US
PRODUCT CATALOG
CONTACT US