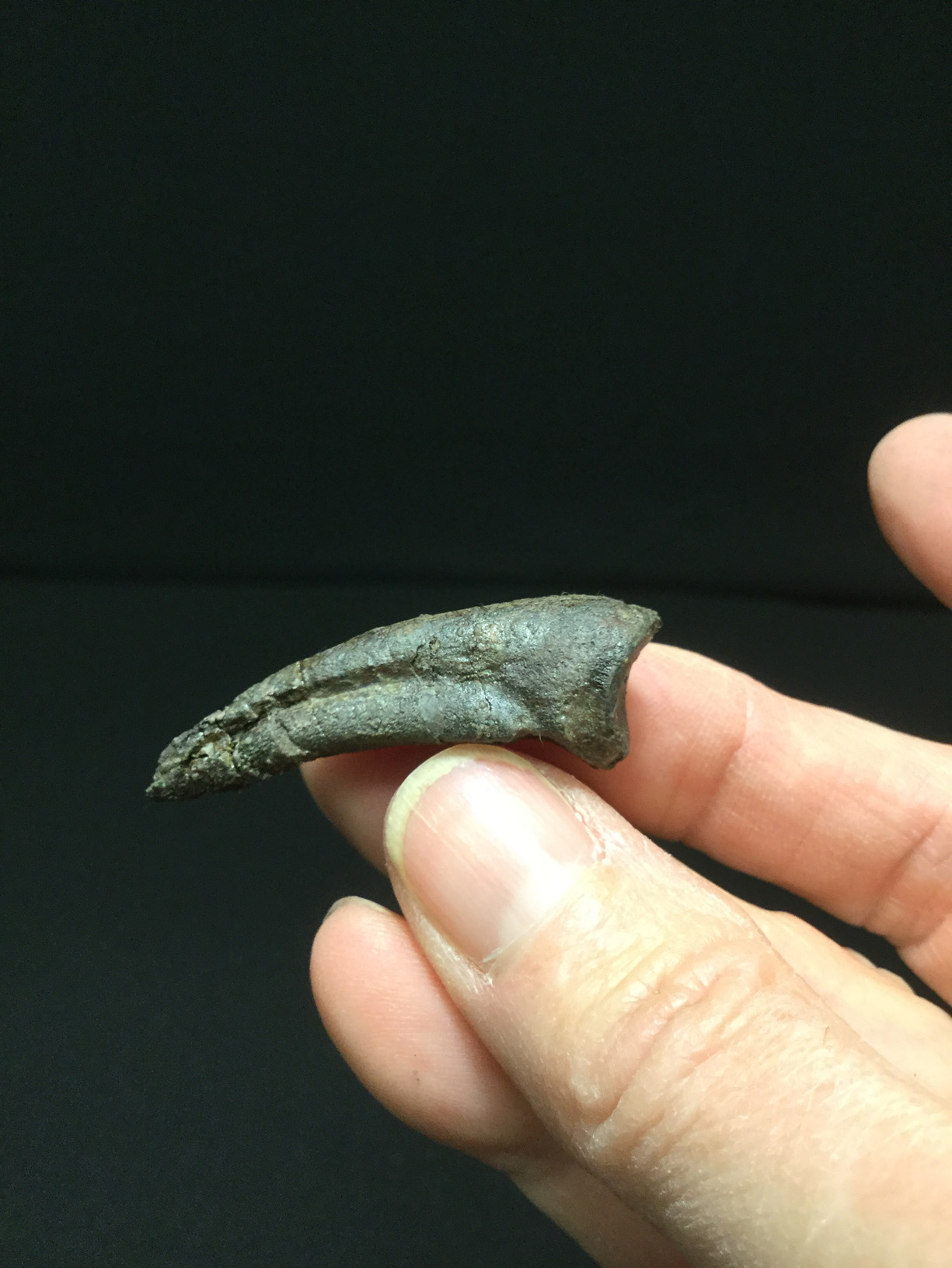 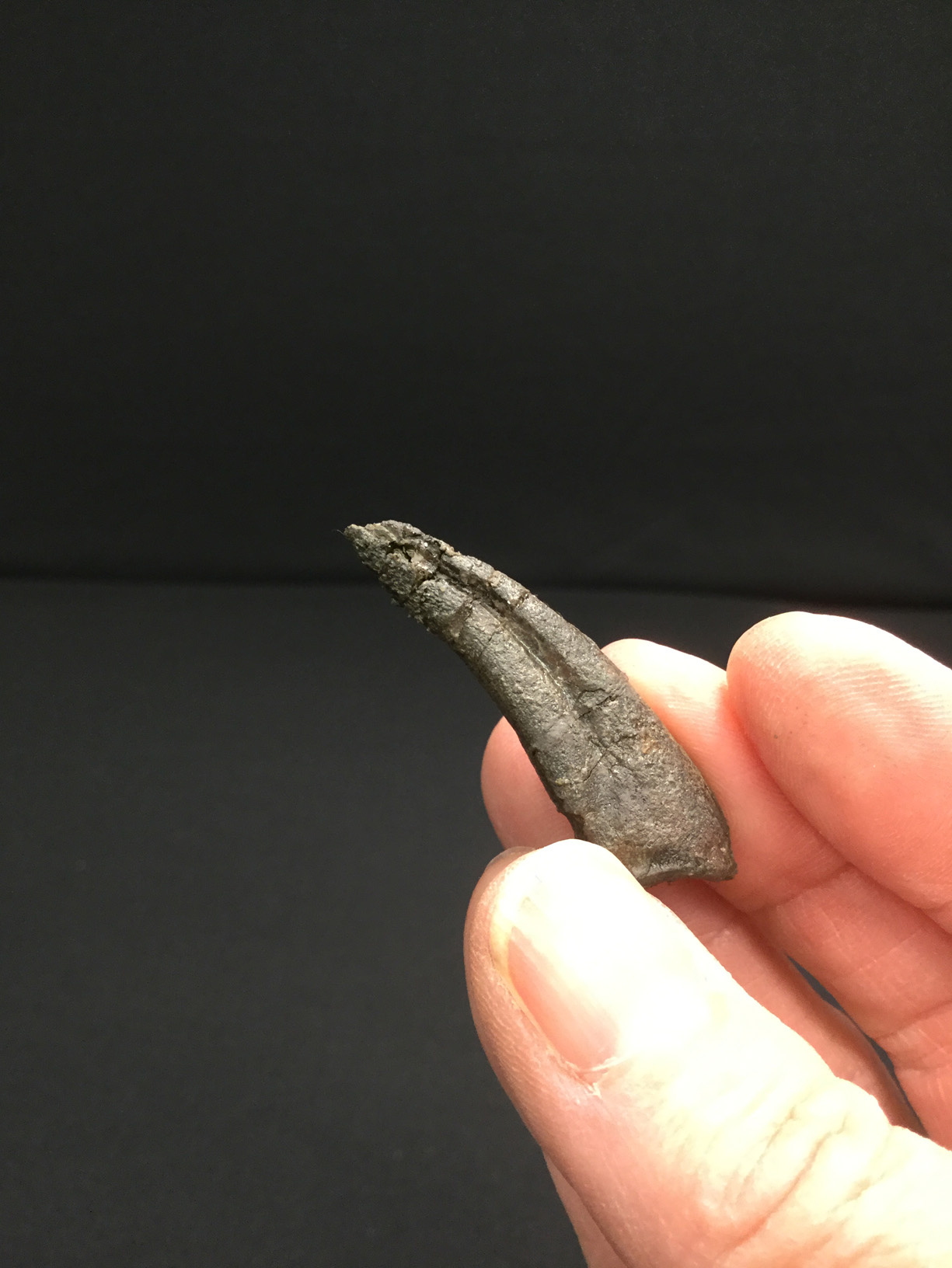 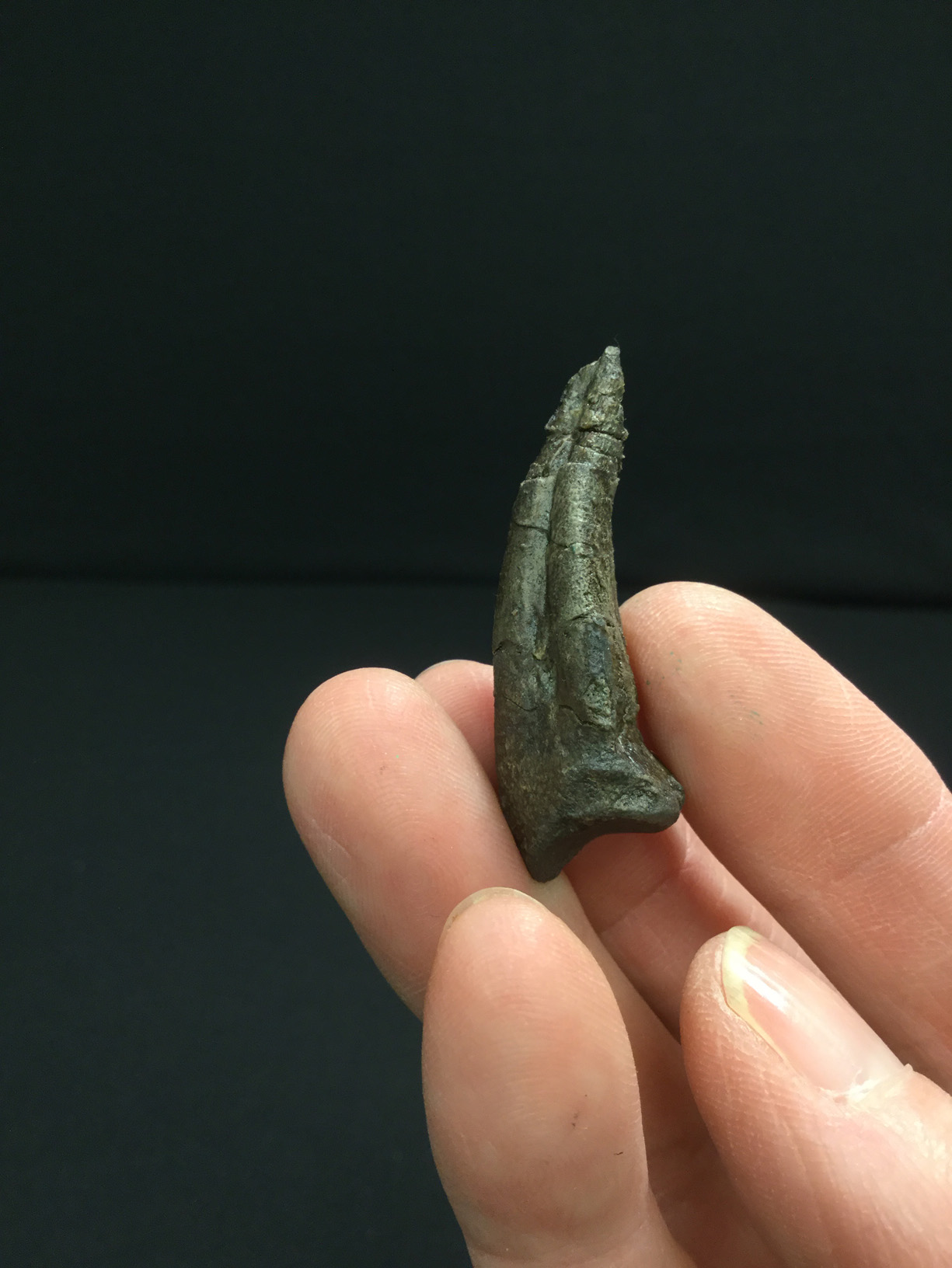 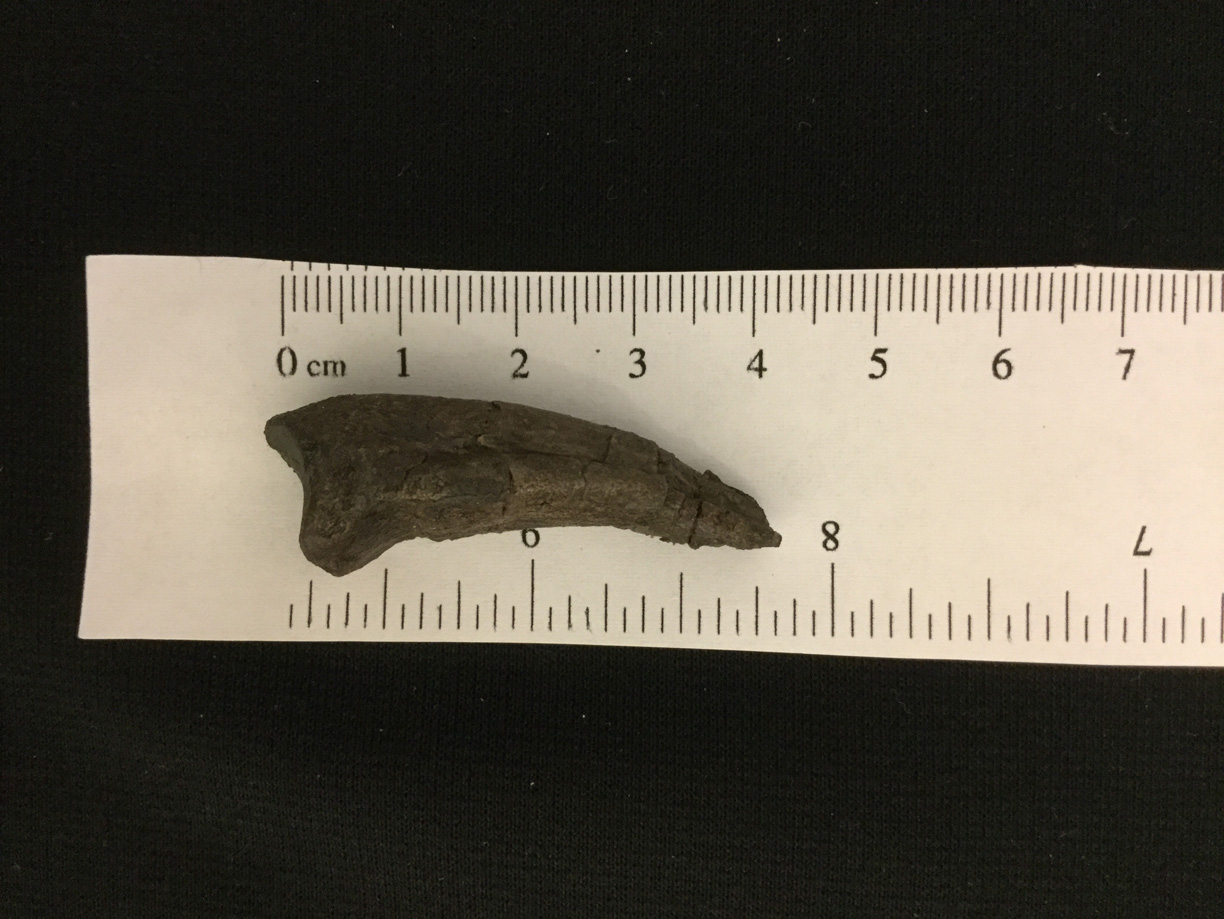 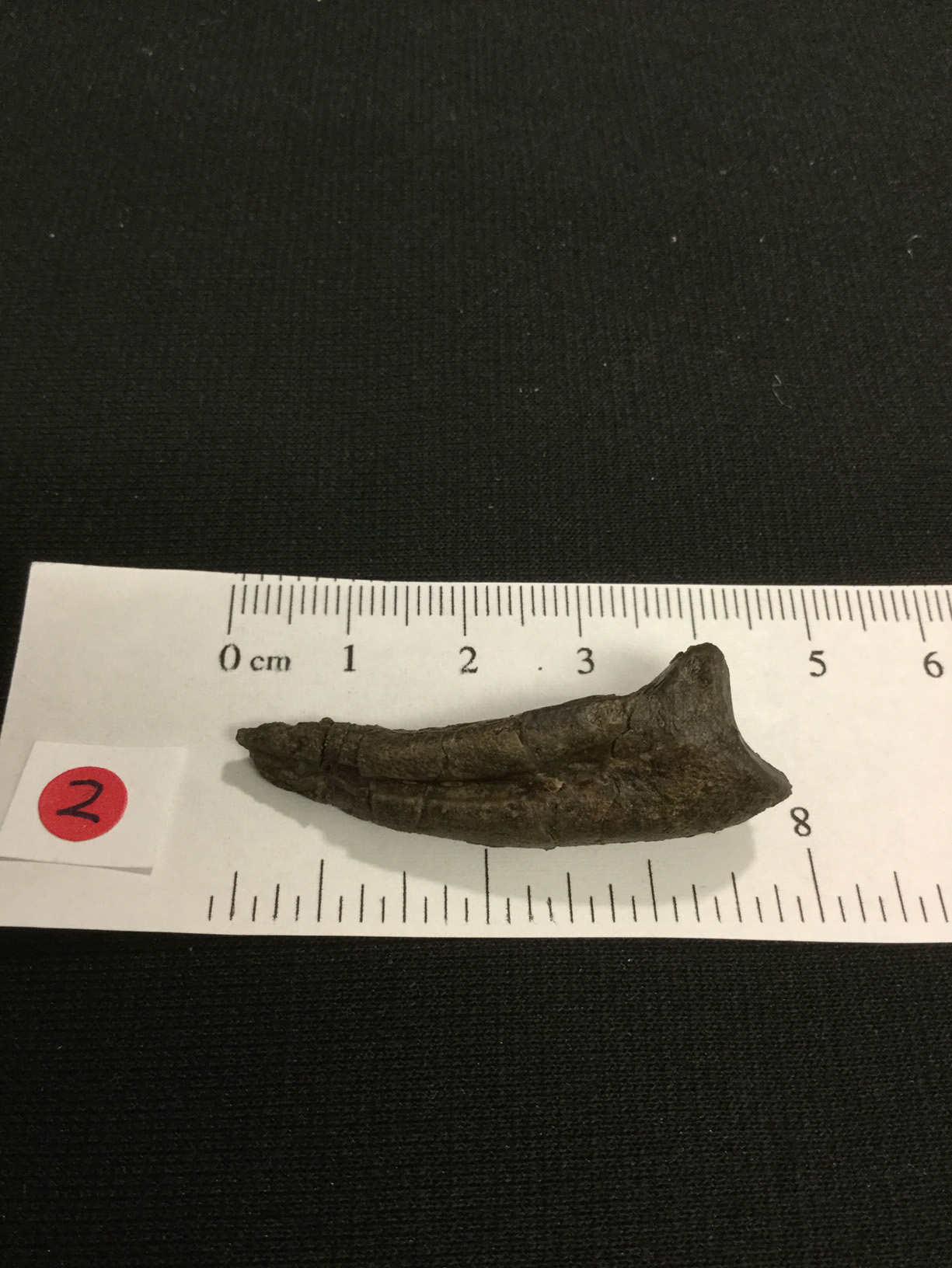 This specimen is a pes claw the ornithischian dinosaur Othnielia. It is 4.5 cm. It has only minor restoration of tiny fractures. This example has excellent detail for such a tiny bone of this genus.

Othnielia is a genus of ornithischian dinosaur, named after its original describer, Professor Othniel Charles Marsh, an American paleontologist of the 19th century. The taxon, Othnielia rex, was named by Peter Galton in 1977 from a species Marsh (1877) called Nanosaurus rex.
Without the remains now included in Othnielosaurus, this animal is dubious, and can only be described in generalities based on similar animals. It was relatively small for a dinosaur, at around 1.5 to 2 metres (4.9 to 6.6 ft) long, and 10 kilograms (22 lb) in weight, and an agile bipedal herbivore with proportionally small arms and long legs. Animals of this genus were included in the novel Jurassic Park as "othys", tree-climbing small herbivores, although there is no evidence for this kind of behavior.
Remains assigned to Othnielia have been found in Wyoming, Utah, and Colorado in rocks of the Late Jurassic age (Oxfordian-Tithonian) Morrison Formation, but with Galton's 2007 revision of Morrison ornithischians, the only definite remains are YPM 1925 (the holotype femur of "Nanosaurus" 'rex') and possibly some other associated postcranial bits. He considered the femur undiagnostic and thus Othnielia to be a dubious name, and removed two partial skeletons to the new genus Othnielosaurus. Recently however new nearly complete specimens found in Colorado are being studied and will add significant detail to knowledge of the genus.

$800
Purchase
Jurassic Morrison Othnielia Claw has been added to your cart.
Continue Shopping Checkout Now
© fossilAvenue.com
HOME
ABOUT US
PRODUCT CATALOG
CONTACT US